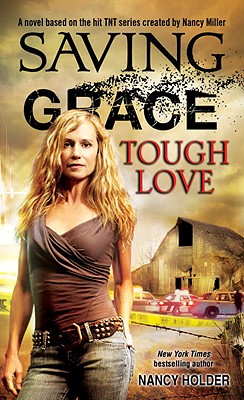 A gripping novel packed with heart and heat, based on the hit television series Saving Grace

Life’s been tough for Oklahoma police detective Grace Hanadarko. She’s got the talent it takes to make her a damn fine cop—but a personal life that can make your hair stand on end. Earl is not your average angel, but he is determined to lead Grace down the road to salvation—if he can handle the hard-as-nails journey.

Oklahoma City is caught in the deadly cross fire between white-supremacist vigilantes known as the Sons of Oklahoma and black and Hispanic street gangs. Grace feels the pressure, especially when her best friend is targeted for protecting the runaway wife of the Sons’ abusive leader. As if arson, vandalism, and bloodshed aren’t enough for Grace to go full throttle, the very sick young friend of her nephew is kidnapped, and his abductors threaten to withhold medical treatment. But Grace has heart—and she won’t put down her gun until there’s nothing left to fight for.

Nancy Holder is the New York Times bestselling author of the Wicked series (with coauthor Debbie Viguié) and the Possessions series. She has written many novels and short stories set in the Buffy the Vampire Slayer, Angel, Hellboy, and Smallville universes. A four-time winner of the Bram Stoker Award from the Horror Writers Association, she is a former director of children’s ministries for her local United Methodist church. She lives in San Diego with her daughter, Belle, two cats, and Panda Monium Holder, a Cardigan Welsh Corgi.
or
Not Currently Available for Direct Purchase
Copyright © 2020 American Booksellers Association