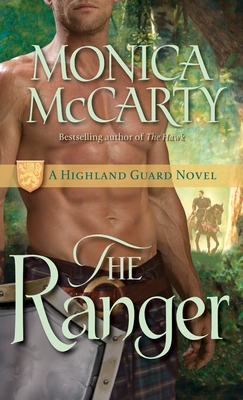 Chosen to help Robert the Bruce in his quest to free Scotland from English rule and claim his crown, the legendary team of warriors known as the Highland Guard battles on.

Embedded deep behind enemy lines, Arthur “Ranger” Campbell is prized for his razor-sharp senses and his ability to blend into the shadows. But when Arthur infiltrates the clan of the chieftain who murdered his father, his heart is locked on revenge. Inside he faces unexpected resistance from the sweetest of obstacles—a honey-haired siren who is his enemy’s daughter.

Intrigued by this ruggedly handsome newcomer to her father’s forces, the vivacious, enchanting Anna MacDougall is a woman whose skill at uncovering deception rivals Arthur’s own. Though yearning for a quiet life with a good man to love, Anna is drawn to this mysterious knight whose eyes devour her but whose words push her away. As danger, treachery, and the threat of looming war draw them closer into each other’s arms, a warrior made of steel must make a choice from the heart: love or revenge.

Monica McCarty is the bestselling author of The Hawk and The Chief, the first two books in the Highland Guard series, the Highlander trilogy (Highlander Untamed, Highlander Unmasked, and Highlander Unchained), and the Campbell trilogy (Highland Warrior, Highland Outlaw, and Highland Scoundrel). Her interest in the Scottish clan system began in the most unlikely of places: a comparative legal history course at Stanford Law School. After a short but enjoyable stint as an attorney, she realized that her career as a lawyer set against her husband’s transitory life as a professional baseball player was not exactly a match made in heaven. So she traded in her legal briefs for Scottish historical romances with sexy alpha heroes. Monica McCarty lives in the San Francisco Bay area with her husband and their two children.
Loading...
or support indie stores by buying on
(This book is on backorder)