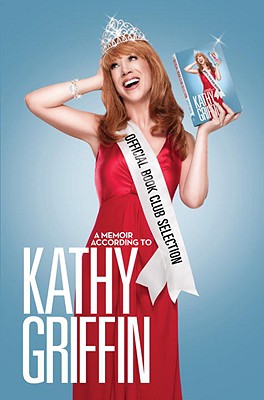 A Memoir According to Kathy Griffin

A Conversation with Kathy Griffin:

Q: State your name and profession.


KG: My name is Kathy Griffin, and I am a teller of d**k jokes. And a plumber.

Q: This is your first book. Had you ever considered writing anything before? A novel? Or a work of historical scholarship? Or a children's story?
KG: I had not considered it, because I'd always been told by the nuns at St. Bernadine's that my cursive was poor. A children' s story is an interesting idea. How's this for a title: "Waterboarding Pre-Teens: The Debate is Back On." I have a political side as well.

Q: You seem fairly obsessed with Oprah. Is this something you'll ever outgrow?
KG: I will never outgrow my obsession with Oprah. Just as she will never outgrow her cardigan sweaters. Oops, she already has. Now look, that sounds like a dig, but it's not. It's called a struggle, and I'm on it with her. I support her. (Not as much as she needs those underwire bras to support her, because she's got some serious ropes and pulleys going on there.) The point is, I worship her, and fear her at the same time. And believe me, that' s how she wants it. Don't be fooled.

Q: Did I miss something? Where's Celine Dion in this book?
KG: I didn't write about Celine Dion, only because of my fear of her husband Rene Angelil. I have an unfounded but constant fear that he could be in the French-Canadian mafia. Or have French-Canadian mafia ties, and by ties I don't mean les cravats. And I fear that I may be abducted, whisked away and held prisoner at a charming little brasserie in Montreal, forced to eat multiple Croque Monsieur sandwiches until I confess to knowing the lyrics to every single one of her songs.

Q: What do you think gays should take away from reading this book?
KG: I think the gays should be happy with this book. It talks a lot about being who you are, and I certainly mention a lot of gay people. I would say it definitely has strong gay themes, and the gay community should know that frankly it has been a moral struggle for me to even acknowledge the heterosexual community in this book at all. But I am slowly reaching out an olive branch to the heterosexual community, even though I believe everything they do goes against the teachings of Our Lord and Savior Jesus Christ. But I'm trying not to judge them.

Q: Describe your ideal, make-a-wish day of personal experiences with bats**t celebrities.
KG: Well, it would start with some sort of a fit in the hair-and-makeup trailer on a set. I heard a story that when Sharon Stone was working on "Casino," she got into such a fight with her hairdresser, that after he spent four hours doing this beautiful bouffant hairdo for her, she got up and walked in the sink and put her head underwater. I have no idea if that's true, but I hope it is, cause that's some awesome s**t I would love to see. Then it would go right to lunch, where I could witness an eating disorder. Maybe a Lohan is purging in a bush somewhere with her finger down her throat. Or perhaps there's an Olsen twin on a scale crying because she finally tipped 100. Any outburst over weight I would cherish. Also, it would be great to see an actress have a workload meltdown. So maybe at 2:00 some A-lister saying, "I can't handle this s**t anymore." Because I love when actors can't deal with a normal workday, and they think two in the afternoon is like midnight, so I would love to see somebody storming to their car, exhausted because they've put in a grueling four-hour workday of saying three lines and texting their nanny. Then it's maybe off to an illicit affair. At the top of my wish list would be following a rapper or a football player over to his baby mama's house where a screaming match ensues to the point where someone, maybe me, has to anonymously dial 911, and then I take a couple pictures, and I become an unannounced star witness later at the trial, entering Joan Collins-style in a smashing hat. And then at the end of the day it's a healthy round of clubbing with Janice Dickinson, and then on the way home we go to the Beverly Glen pharmacy and run into Paula Abdul. All three of us secretly take our small white-paper pharmacy bags and put them behind our backs and make uncomfortable small talk.


Official Book Club Selection is Kathy Griffin unplugged, uncensored, and unafraid to dish about what really happens on the road, away from the cameras, and at the star party after the show. (It's also her big chance to score that coveted book club endorsement she's always wanted. Are you there, Oprah? It's me, Kathy.)

Kathy Griffin has won Emmys for her reality show Kathy Griffin: My Life on the D-List, been nominated for a Grammy, worked and walked every red carpet known to man, and rung in the New Year with Anderson Cooper. But the legions of fans who pack Kathy's sold-out comedy shows have heard only part of her remarkable story. Writing with her trademark wit, the feisty comic settles a few old scores, celebrates the friends and mentors who helped her claw her way to the top, and shares insider gossip about celebrity behavior–the good, the bad, and the very ugly. She recounts the crazy ups and downs of her own career and introduces us to some of the supertalented people she encountered before they got famous (or, in some cases, after fame went to their heads). Word to the wise: If you've ever crossed Kathy Griffin at some point in your life, check the index for your name.

Along the way, Kathy reveals intimate details about her life before and after she made the big time. She opens up about everything from growing up with a dysfunctional family in suburban Illinois to bombing as a young comedian in L.A., from her well-publicized plastic surgery disasters to her highly publicized divorce, and more. Only in this book will you learn how the dinner table is the best training ground for a career in stand-up, how speaking your mind can bite you on the ass and buy you a house, and which people in Kathy's life have taught her the most valuable lessons–both inside and outside the entertainment industry. And as if all that wasn't enough, there are also dozens of exclusive and somewhat embarrassing photos from Kathy's own collection–featuring the diva of the D List herself, with her old nose as well as her new one, plus celebrity friends, foes, frenemies, and hangers-on for you to gawk at.

Refreshingly candid, unflinchingly honest, and full of hilarious "Did she really say that?" moments, Official Book Club Selection will make you laugh until you cry, or just puke up a little bit.

Kathy Griffin, a multi--Emmy Award--winning and Grammy-nominated comedian and actress, is best known for her Bravo television reality show "Kathy Griffin: My Life on the D-List, " her multiple stand-up comedy specials on HBO, Comedy Central, and Bravo, and her four-year stint on the NBC sitcom "Suddenly Susan." She has hosted several award shows and appeared on numerous talk shows including "Late Night with David Letterman," "The Tonight Show with Jay Leno, " and "The View." She has been nominated for a Grammy for her comedy CD, "For Your Consideration," and performs to sold-out audiences at venues worldwide.

Praise For Official Book Club Selection: A Memoir According to Kathy Griffin…

"With a foreword begging Oprah to be on her show and a chapter called ''Brooke Shields, Don't Read This,'' Kathy Griffin's autobiography, Official Book Club Selection, is everything you'd expect. What makes it a terrific read, though, is all the stuff you wouldn't expect: binge eating (her own, not Paula Abdul's); her conviction that her late brother was a child molester; and her unflinching accounts of her plastic surgery and her divorce. Whether or not you're a fan, you'll respect her tenacity, work ethic, and loyalty to her parents. And if you are a fan of Griffin's celeb-tastic stand-up, skip to chapter 8, which should be called ''Helen Hunt, Thomas Haden Church, and Ellen DeGeneres, Don't Read This.'' Everyone else, dive in. A–"—Entertainment Weekly


"You feel as if Griffin is in the room with you, excitedly gesturing as she recounts a story [and] that's the beauty of Official Book Club Selection—Griffin has been made a fool countless times in her career and her willingness to share those lumps, which, face it, you'll never read in some Oscar-winning A-lister's autobiography, endears her tremendously."—Richmond Times Dispatch