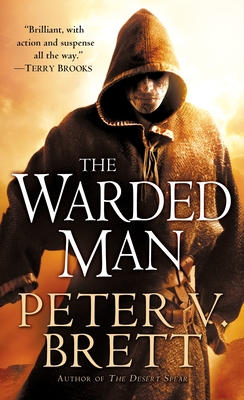 Book One of The Demon Cycle

As darkness falls after sunset, the corelings rise—demons who possess supernatural powers and burn with a consuming hatred of humanity.

For hundreds of years the demons have terrorized the night, slowly culling the human herd that shelters behind magical wards—symbols of power whose origins are lost in myth and whose protection is terrifyingly fragile. It was not always this way. Once, men and women battled the corelings on equal terms, but those days are gone. Night by night the demons grow stronger, while human numbers dwindle under their relentless assault. Now, with hope for the future fading, three young survivors of vicious demon attacks will dare the impossible, stepping beyond the crumbling safety of the wards to risk everything in a desperate quest to regain the secrets of the past. Together, they will stand against the night.

Praise For The Warded Man: Book One of The Demon Cycle…

"Brett's debut builds slowly and grimly on a classic high fantasy framework of black-and-white morality and bloodshed. Young Arlen battles demons to save his mother while his father watches in terror; when his mother dies, Arlen runs away. Leesha leaves her village to work in the city hospital of Angiers after her betrothed claims to have taken her virginity. Jongleur Arrick Sweetsong saved himself from demons at the expense of a female friend, but he honors her last request and raises her son, Rojer, as his apprentice. Only near the end do the three strands of the story begin to intertwine. With its nameless enemies that exist only to kill, Brett's gritty tale will appeal to those who tire of sympathetic villains and long for old-school orc massacres."—Publishers Weekly

“I enjoyed The Warded Man immensely. There is much to admire in Peter Brett’s writing, and his concept is brilliant. There’s action and suspense all the way, plus he made me care about his characters and want to know what’s going to happen next.”—Terry Brooks

“The Warded Man works not only as a great adventure novel but also as a reflection on the nature of heroism.”—Charlaine Harris

“An absolute masterpiece . . . The novel [is] literally ‘unputdownable,’ and certainly deserves to be the next Big Thing in dark fantasy.”—HorrorScope

“A very accomplished debut fantasy, broad in its scope.”—SFRevu