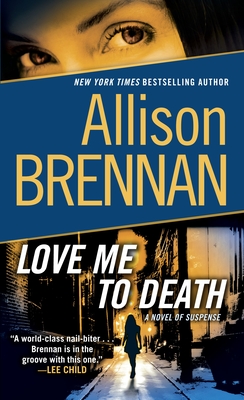 Love Me to Death (Mass Market)

A Novel of Suspense (Lucy Kincaid #1)

“World-class nail-biter . . . [Allison] Brennan is in the groove with this one.”—Lee Child

Six years ago, Lucy Kincaid was attacked and nearly killed by an online predator. She survived. Her attacker did not. Now Lucy’s goal is to join the FBI and fight cyber-crime, but in the meantime, she’s volunteering with a victim’s rights group, surfing the Web undercover to lure sex offenders into the hands of the law. But when the predators she hunts start turning up as murder victims, the FBI takes a whole new interest in Lucy.

With her future and possibly even her freedom suddenly in jeopardy, Lucy discovers she’s a pawn in someone’s twisted plot to mete out vigilante justice. She joins forces with security expert and daredevil Sean Rogan, and together they track their elusive quarry from anonymous online chat rooms onto the mean streets of Washington, D.C. But someone else is shadowing them: A merciless stalker has his savage eye on Lucy. The only way for her to escape his brutality may be another fight to the death.

Praise For Love Me to Death: A Novel of Suspense (Lucy Kincaid #1)…

“World-class nail-biter . . . Brennan is in the groove with this one.”—Lee Child
or
Not Currently Available for Direct Purchase
Copyright © 2020 American Booksellers Association