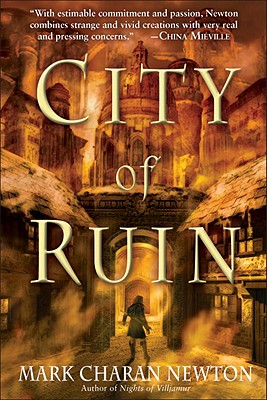 City of Ruin (Legends of the Red Sun #2)

In the frozen north of a far-flung world lies Villiren, a city plagued by violent gangs and monstrous human/animal hybrids, stalked by a serial killer, and targeted by an otherworldly army. Brynd Lathraea has brought his elite Night Guard to help Villiren build a fighting force against the invaders. But success will mean dealing with the half-vampyre leader of the savage Bloods gang. Meanwhile, reptilian rumel investigator Rumex Jeryd has come seeking refuge from Villjamur’s vindictive emperor—only to find a city riddled with intolerance between species, indifference to a murderer’s reign of terror, and the powerful influence of criminals. As the enemy prepares to strike, and Villiren’s defenders turn on each other, three refugees—deposed empress Jamur Rika, her sister Eir, and the scholar Randur Estevu—approach the city. And with them they bring a last, desperate hope for survival . . . and a shocking revelation that will change everything.

Praise For City of Ruin (Legends of the Red Sun #2)…

“Mark Charan Newton’s star as writer is burning with a fierce talent.”—Stephen Hunt, author of The Rise of the Iron Moon

“This is fantasy with vast scope and ambition.”—The Guardian (U.K.)