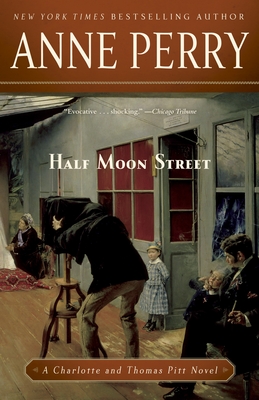 For Superintendent Thomas Pitt, the sight of the dead man riding the morning tide of the Thames is unforgettable. The corpse lies in a battered punt drifting through the early mist, clad in a torn green gown and bestrewn with flowers. Pitt’s determined search for answers to the victim’s identity leads him deep into London’s bohemia—to the theatre where beautiful Cecily Antrim is outraging society with her bold portrayal of a modern woman, and into studios where masters of light and shadow are experimenting with the fascinating new art of photography. But only Pitt’s masterly investigative skills enable him to identify the wildfire passions raging through this tragedy of good and evil, to hunt down the guilty and protect the innocent.

Praise For Half Moon Street: A Charlotte and Thomas Pitt Novel…

“What a complex and intriguing writer Anne Perry is. . . . Half Moon Street is a beautifully woven mystery. . . . Perry deftly conveys the rich tapestry of Victorian life. . . . She proves, like all the best writers, that outward standards may change, but inner truths remain eternal.”—The Plain Dealer

“Perry has the great gift of making it all seem immediate and very much alive.”—The Philadelphia Inquirer

“Readers get to experience the pace of a changing world through the eyes of intelligent observers . . . all while piecing together clues and moving closer to the author’s famously satisfying denouements.”—BookPage