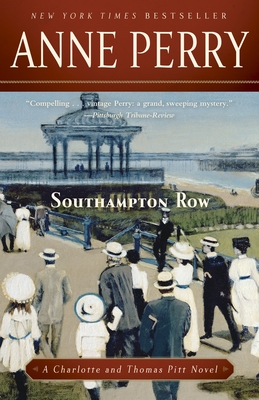 In Victorian England, a divisive election is fast approaching. Passions are so enflamed that Thomas Pitt, shrewd mainstay of the London police, has been ordered not to solve a crime but to prevent a national disaster. The aristocratic Tory candidate—and Pitt’s archenemy—is Charles Voisey. The Liberal candidate is Aubrey Serracold, whose wife’s dalliance with spiritualism threatens his chances. Indeed, she is one of the participants in a late-night séance that becomes the swan song of a stylish clairvoyant who is found brutally murdered the next morning in her house on Southampton Row. Meanwhile, Pitt’s wife, Charlotte, and their children are enjoying a country vacation—unaware that they, too, are deeply endangered by the same fanatical forces hovering over the steadfast Pitt.

Praise For Southampton Row: A Charlotte and Thomas Pitt Novel…

“Fast moving and utterly engrossing . . . Perry’s Victorian novels attain the societal sweep of Trollope or Thackeray; she has absolute command over both political history and the small fascinating details of everyday life.”—Booklist (starred review)

“A mystery—a very good one . . . Status, rights, love, and duty are hallmarks of Perry’s narratives. Here, they are brought into finer focus, allowing their inherent drama to carry the story forward.”—Minneapolis Star Tribune

“Perry skillfully explores the gap between the Victorians’ love of knowledge and their deepening suspicion that their way of life cannot continue.”—The Boston Globe

“Delicious political treachery . . . [Perry’s] grasp of the economic and social forces of the period is masterly.”—Chicago Sun-Times
or support indie stores by buying on
Copyright © 2020 American Booksellers Association