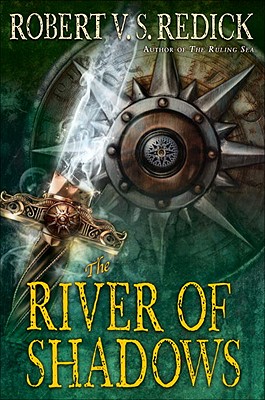 The River of Shadows

In the gripping sequel to Robert V. S. Redick’s acclaimed epic fantasy novels The Red Wolf Conspiracy and The Ruling Sea, the crew of the vast, ancient ship Chathrand have reached the shores of the legendary southern empire of Bali Adro. Many have died in the crossing, and the alliance of rebels, led by the tarboy Pazel Pathkendle and the warrior Thasha Isiq, has faced death, betrayal, and darkest magic. But nothing has prepared them for the radically altered face of humanity in the South.

They have little time to recover from the shock, however. For with landfall, the battle between the rebels and centuries-old sorcerer Arunis enters its final phase. At stake is control of the Nilstone, a cursed relic that promises unlimited power to whoever unlocks the secrets of its use—but death to those who fail. And no one is closer to mastering the Stone than Arunis.

Desperate to stop him, Pazel and Thasha must join forces with their enemies, including the depraved Captain Rose and the imperial assassin Sandor Ott. But when a suspicious young crewmember turns his attentions to Thasha, it is the young lovers themselves who are divided—most conveniently for Arunis. As the mage’s triumph draws near, the allies face a terrible choice: to break their oaths and run for safety, or to hunt the world’s most dangerous sorcerer through the strange and deadly dream kingdom known as the River of Shadows, and to face him a last time among the traps and horrors of his lair.

Brimming with high adventure, dark enchantment, and unforgettable characters, The River of Shadows deftly secures Redick’s place in the ranks of epic fantasy’s most original and enthralling storytellers.

Praise For The River of Shadows…

“This is one terrific read. . . . I can’t remember when I’ve been more enthralled.”—Terry Brooks

“With comparisons to George R. R. Martin and Philip Pullman, this is highly recommended for all fantasy collections.”—Library Journal (starred review)

“Exciting . . . enough plot twists and double-crosses to satisfy the most demanding lovers of suspense . . . Redick’s brilliant depiction of the microcosmic world aboard the Chathrand will captivate readers.”—Publishers Weekly

“This high-seas adventure has all the ingredients for a good read: a large and diverse cast of characters, magic, deceit, betrayal and unexpected twists.”—RT Book Reviews

“Easily one of the best fantasy novels of the year.”—Fantasy Book Critic

Robert V. S. Redick's "The Red Wolf Conspiracy" was a "Locus-"recommended read and, according to "SFX" magazine, one of the top ten science fiction and fantasy releases of 2008. Book II of this series, "The Ruling Sea, " was rated the number two fantasy of 2009 by Fantasy Book Critic. A former international development researcher, Redick worked most recently for the antipoverty organization Oxfam. He lives in western Massachusetts.
Loading...
or
Not Currently Available for Direct Purchase