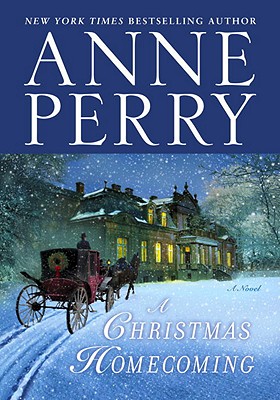 Among the brilliant array of Anne Perry's New York Times bestselling novels, her Christmas stories occupy perhaps the warmest spot in the hearts of readers. Each one is a masterpiece of suspense; each is alight with the true holiday spirit.
In A Christmas Homecoming, a familiar face from the Charlotte and Thomas Pitt novels Charlotte's mother, Caroline travels with her young husband, Joshua Fielding, and his theatrical troupe to Whitby, the Yorkshire fishing village where Dracula the vampire first touched English soil in the sensational novel named after him. Joshua has arranged to produce a stage adaptation of Dracula by the daughter of Whitby millionaire Charles Netheridge during the Christmas holiday, but after the disastrous first read-through of her amateurish script, only the fact that the company is depending on Netheridge's financial backing for their spring tour keeps them at work.
As tempers flare and wind and snow swirl around Netheridge's lonely hilltop mansion, a black-cloaked stranger emerges from the storm an eerily opportune arrival, for this enigmatic figure, one Anton Ballin, turns out to be a theatrical genius. At the same time, a brooding evil makes itself felt. Instead of the theatrical triumph that Netheridge desired for his daughter, there is murder shocking and terrifying.
Anne Perry's ninth Christmas novel keeps us poised on a razor's edge of suspense, hypnotized by a story in which the heartwarming power of goodness is challenged by the seductive power of inner darkness. In the end, A Christmas Homecoming lifts the spirit and rejoices the heart.


Praise For A Christmas Homecoming…

Praise for the Christmas novels of Anne Perry

“[Perry] writes with detail that invades the senses.”—Lincoln Journal Star

“Poignant . . . should be on the Christmas stocking list of anyone who likes a sniffle of nostalgia.”—The Washington Times

“Intriguing . . . Perry’s use of period detail is, as always, strong and evocative.”—The Seattle Times

“A delightful little book . . . Perry’s gift is that she can evoke a sense of place and time while still producing the thrills and chills expected of a modern-day mystery writer.”—The Orlando Sentinel

Anne Perry is the bestselling author of eight earlier holiday novels A Christmas Odyssey, A Christmas Promise, A Christmas Grace, A Christmas Journey, A Christmas Visitor, A Christmas Guest, A Christmas Secret, and A Christmas Beginning as well as the William Monk series and the Charlotte and Thomas Pitt series set in Victorian England, five World War I novels, and a work of historical fiction, The Sheen on the Silk. Anne Perry lives in Scotland."
Loading...
or
Not Currently Available for Direct Purchase