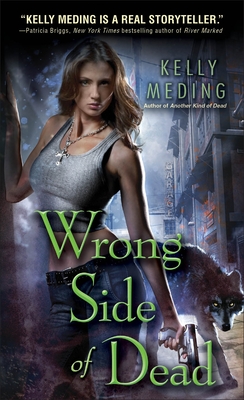 Monster hunter Evangeline Stone woke up on the wrong side of dead this morning—and now there’s hell to pay.

Barely recovered from her extended torture at the hands of mad scientist Walter Thackery, Evy can use a break. What she gets instead is a war, as the battered Triads that keep Dreg City safe find themselves under attack by half-Blood vampires who have somehow retained their reason, making them twice as lethal. Worse, the Halfies are joined by a breed of were-creature long believed extinct—back and more dangerous than ever. Meanwhile, Evy’s attempts at reconciliation with the man she loves take a hit after Wyatt is viciously assaulted—an attack traced to Thackery, who has not given up his quest to exterminate all vampires . . . even if he has to destroy Dreg City to do it. With Wyatt’s time running out, another threat emerges from the shadows and a staggering betrayal shatters the fragile alliance between the Triads, vampires, and shapeshifters, turning Evy’s world upside down forever.

Praise For Wrong Side of Dead (Dreg City #4)…

Kelly Meding discovered Freddy Krueger at a very young age and has since had a lifelong obsession with horror, science fiction, and fantasy, on which she blames her interest in vampires, psychic powers, superheroes, and all things paranormal. When not writing, she can be found crafting jewelry, playing with her cat, or enjoying a good cup of coffee.
Loading...
or
Not Currently Available for Direct Purchase