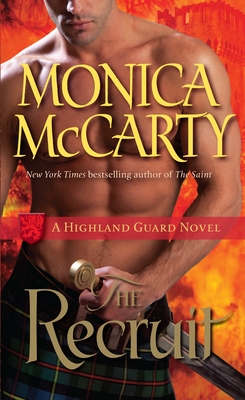 Scotland’s King Robert the Bruce is retaking his kingdom from the invading English. To win, he’ll need all the grit and courage of his elite band of warriors, the Highland Guard, men who fight without fear and love without limits.

Fiery, aggressive, and bold, Kenneth Sutherland is a true champion—skilled with any weapon and driven to win. Now Kenneth is ready for his greatest challenge: joining Robert the Bruce’s secret army to fight among the elite. Kenneth’s best chance to attain that honor is by winning the Highland Games. Focused and prepared for victory, he is caught off guard by a lovely wisp of a woman—and a stolen moment of wicked seduction. Her innocent arousal and her shameless hunger fire his blood. He will win his place in the guard—and in Mary of Mar’s bed.

The ruggedly handsome hero-in-the-making stirs a heart that should know better. Mary vows that her surrender will be sport only—no promises, no heartbreak, just one night of incredible passion. Nothing, she swears, will persuade her to give up her hard-wrought independence and put her fate in the hands of another powerful man. But with every gentle touch and heart-pounding kiss, Kenneth makes her want more. Now Mary wants his heart. But is this determined champion willing to surrender everything for love?

Monica McCarty is the bestselling author of The Saint, The Viper, The Ranger, The Hawk, and The Chief, the first five books in the Highland Guard series, the Highlander trilogy (Highlander Untamed, Highlander Unmasked, and Highlander Unchained), and the Campbell trilogy (Highland Warrior, Highland Outlaw, and Highland Scoundrel). Her interest in the Scottish clan system began in the most unlikely of places: a comparative legal history course at Stanford Law School. After a short but enjoyable stint as an attorney, she realized that her career as a lawyer set against her husband’s transitory life as a professional baseball player was not exactly a match made in heaven. So she traded in her legal briefs for Scottish historical romances with sexy alpha heroes. Monica McCarty lives in the San Francisco Bay Area with her husband and their two children.