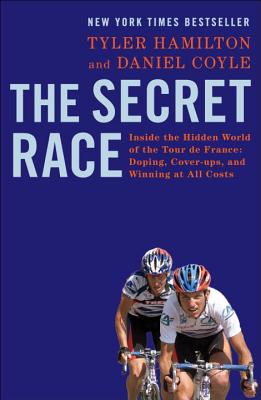 Inside the Hidden World of the Tour de France: Doping, Cover-ups, and Winning at All Costs

The Secret Race is a definitive look at the world of professional cycling—and the doping issue surrounding this sport and its most iconic rider, Lance Armstrong—by former Olympic gold medalist Tyler Hamilton and New York Times bestselling author Daniel Coyle.

Over the course of two years, Coyle conducted more than two hundred hours of interviews with Hamilton and spoke candidly with numerous teammates, rivals, and friends. The result is an explosive book that takes us, for the first time, deep inside a shadowy, fascinating, and surreal world of unscrupulous doctors, anything-goes team directors, and athletes so relentlessly driven to succeed that they would do anything—and take any risk, physical, mental, or moral—to gain the edge they need to win.

Tyler Hamilton was once one of the world’s best-liked and top-ranked cyclists—a fierce competitor renowned among his peers for his uncanny endurance and epic tolerance for pain. In the 2003 Tour de France, he finished fourth despite breaking his collarbone in the early stages—and grinding eleven of his teeth down to the nerves along the way. He started his career with the U.S. Postal Service team in the 1990s and quickly rose to become Lance Armstrong’s most trusted lieutenant, and a member of his inner circle. For the first three of Armstrong’s record seven Tour de France victories, Hamilton was by Armstrong’s side, clearing his way. But just weeks after Hamilton reached his own personal pinnacle—winning the gold medal at the 2004 Olympics—his career came to a sudden, ignominious end: He was found guilty of doping and exiled from the sport.

From the exhilaration of his early, naïve days in the peloton, Hamilton chronicles his ascent to the uppermost reaches of this unforgiving sport. In the mid-1990s, the advent of a powerful new blood-boosting drug called EPO reshaped the world of cycling, and a relentless, win-at-any-cost ethos took root. Its psychological toll would drive many of the sport’s top performers to substance abuse, depression, even suicide. For the first time ever, Hamilton recounts his own battle with clinical depression, speaks frankly about the agonizing choices that go along with the decision to compete at a world-class level, and tells the story of his complicated relationship with Lance Armstrong.

A journey into the heart of a never-before-seen world, The Secret Race is a riveting, courageous act of witness from a man who is as determined to reveal the hard truth about his sport as he once was to win the Tour de France.


Praise For The Secret Race: Inside the Hidden World of the Tour de France: Doping, Cover-ups, and Winning at All Costs…

“Loaded with bombshells and revelations.”—VeloNews

“The holy grail for disillusioned cycling fans . . . The book’s power is in the collective details, all strung together in a story that is told with such clear-eyed conviction that you never doubt its veracity. . . . The Secret Race isn’t just a game changer for the Lance Armstrong myth. It’s the game ender.”—Outside

“ ‘If I cheated, how did I get away with it?’ That question, posed to SI by Lance Armstrong five years ago, has never been answered more definitively than it is in Tyler Hamilton’s new book.”—Sports Illustrated

Tyler Hamilton is a former professional bike racer, Olympic gold medalist, and NCAA champion. He raced professionally from 1995 to 2008 and now runs his own company, Tyler Hamilton Training LLC, in Boulder, Colorado. He lives in Missoula, Montana, with his wife, Lindsay, and his dog, Tanker.

Daniel Coyle is the "New York Times "bestselling""author of "Lance Armstrong's War" and "The Talent Code." He lives with his wife and four children in Cleveland Heights, Ohio, and Homer, Alaska.
Loading...
or
Not Currently Available for Direct Purchase