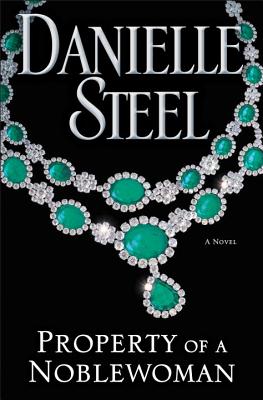 Property of a Noblewoman (Hardcover)

NEW YORK TIMES BESTSELLER - In Danielle Steel's thrilling novel, a woman's legacy--shaped by tragedy, fortitude, and undying devotion--transforms lives and hearts long after she is gone, and fulfills at last her most precious bequest. Faded photographs of a glamorous couple in postwar Europe. Old letters hinting of tragic loss. And a breathtaking array of magnificent jewelry, spectacular stones in exquisite settings. These are the contents of a safe-deposit box long abandoned in a New York City bank. If no heir can be identified, the jewelry will be auctioned. But who was the woman who left such a fortune and no will? Two people, drawn together by chance, begin to unravel the mystery. Jane Willoughby is a law clerk at the surrogate's court and Phillip Lawton a fine arts expert for Christie's auction house. They are simply doing their jobs when they come to the bank to inspect the contents of the box. But for both Jane and Phillip the search turns personal--and their efforts to reconstruct an enigmatic life will lead from New York to London and Paris, to Rome and Naples, and a series of stunning revelations. Eighteen-year-old Marguerite Pearson left America with a broken heart in the shadow of World War II. She found a new life in Europe but forever mourned what she left behind. As the truth about Marguerite's extraordinary history--her forbidden love affair and her family's treachery--is slowly revealed, more people are drawn into the puzzle that Jane and Phillip have pieced together, and one among them will inherit the most unexpected gift of all.

Danielle Steel has been hailed as one of the world's most popular authors, with over 650 million copies of her novels sold. Her many international bestsellers include Blue, Precious Gifts, Undercover, Country, Prodigal Son, Pegasus, A Perfect Life, Power Play, Winners, First Sight, and other highly acclaimed novels. She is also the author of His Bright Light, the story of her son Nick Traina's life and death; A Gift of Hope, a memoir of her work with the homeless; Pure Joy, about the dogs she and her family have loved; and the children's book Pretty Minnie in Paris.
or
Not Currently Available for Direct Purchase
Copyright © 2020 American Booksellers Association