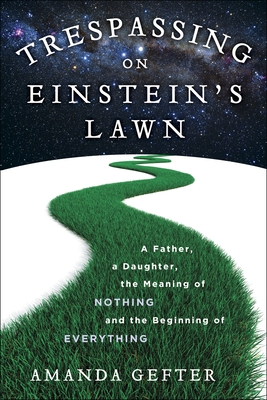 A Father, a Daughter, the Meaning of Nothing, and the Beginning of Everything

In a memoir of family bonding and cutting-edge physics for readers of Brian Greene’s The Hidden Reality and Jim Holt’s Why Does the World Exist?, Amanda Gefter tells the story of how she conned her way into a career as a science journalist—and wound up hanging out, talking shop, and butting heads with the world’s most brilliant minds.

At a Chinese restaurant outside of Philadelphia, a father asks his fifteen-year-old daughter a deceptively simple question: “How would you define nothing?” With that, the girl who once tried to fail geometry as a conscientious objector starts reading up on general relativity and quantum mechanics, as she and her dad embark on a life-altering quest for the answers to the universe’s greatest mysteries.

Before Amanda Gefter became an accomplished science writer, she was a twenty-one-year-old magazine assistant willing to sneak her and her father, Warren, into a conference devoted to their physics hero, John Wheeler. Posing as journalists, Amanda and Warren met Wheeler, who offered them cryptic clues to the nature of reality: The universe is a self-excited circuit, he said. And, The boundary of a boundary is zero. Baffled, Amanda and Warren vowed to decode the phrases—and with them, the enigmas of existence. When we solve all that, they agreed, we’ll write a book.

Trespassing on Einstein’s Lawn is that book, a memoir of the impassioned hunt that takes Amanda and her father from New York to London to Los Alamos. Along the way, they bump up against quirky science and even quirkier personalities, including Leonard Susskind, the former Bronx plumber who invented string theory; Ed Witten, the soft-spoken genius who coined the enigmatic M-theory; even Stephen Hawking.

What they discover is extraordinary: the beginnings of a monumental paradigm shift in cosmology, from a single universe we all share to a splintered reality in which each observer has her own. Reality, the Gefters learn, is radically observer-dependent, far beyond anything of which Einstein or the founders of quantum mechanics ever dreamed—with shattering consequences for our understanding of the universe’s origin. And somehow it all ties back to that conversation, to that Chinese restaurant, and to the true meaning of nothing.

Throughout their journey, Amanda struggles to make sense of her own life—as her journalism career transforms from illusion to reality, as she searches for her voice as a writer, as she steps from a universe shared with her father to at last carve out one of her own. It’s a paradigm shift you might call growing up.

By turns hilarious, moving, irreverent, and profound, Trespassing on Einstein’s Lawn weaves together story and science in remarkable ways. By the end, you will never look at the universe the same way again.

Praise for Trespassing on Einstein’s Lawn

“Nothing quite prepared me for this book. Wow. Reading it, I alternated between depression—how could the rest of us science writers ever match this?—and exhilaration.”—Scientific American

“To Do: Read Trespassing on Einstein’s Lawn. Reality doesn’t have to bite.”—New York

“A zany superposition of genres . . . It’s at once a coming-of-age chronicle and a father-daughter road trip to the far reaches of this universe and 10,500 others.”—The Philadelphia Inquirer

Praise For Trespassing on Einstein's Lawn: A Father, a Daughter, the Meaning of Nothing, and the Beginning of Everything…

“Nothing quite prepared me for this book. Wow. Reading it, I alternated between depression—how could the rest of us science writers ever match this?—and exhilaration.”—Scientific American

“To Do: Read Trespassing on Einstein’s Lawn. Reality doesn’t have to bite.”—New York

“A zany superposition of genres . . . It’s at once a coming-of-age chronicle and a father-daughter road trip to the far reaches of this universe and 10,500 others. . . . Einstein’s Lawn transcends the traditional categorizations publishers try to confer on the books they market.”—The Philadelphia Inquirer

“Gefter’s wit, audacity, intelligence and irreverence, her wonderful relationship with her father, and fan photos of the two of them with famous physicists give the book heart. What gives it heft is Gefter’s gift for reducing mind-blowing concepts . . . into plain English. . . . Try Trespassing on Einstein’s Lawn. Gefter will take you on an outsider’s tour of the universe’s inside story, and you’ll learn—and understand—more than you imagined you could.”—Concord Monitor

“In this mix of memoir and science, Gefter chronicles her quest to understand the big conundrums through study of the physics literature and meetings with remarkable theoreticians from John Archibald Wheeler to Lisa Randall.”—Nature

“Part science writing and part memoir, this adventurous fact-finding romp takes readers across the landscape of ideas about the universe. . . . [Gefter] is a crafty storyteller and journalist. . . . [She] makes even the most esoteric concepts—and there are a lot of them in this book—lucid and approachable. . . . What she discovered about the new frontier of quantum cosmology and the importance of the role of the individual observer is astonishing and awesome, and Gefter’s book is a useful presentation of this thrilling ontological shift for a general audience. Beautifully written and hugely entertaining, this book is a heartfelt introduction to the many mind-bending theories in contemporary physics.”—Kirkus Reviews (starred review)

“This is the most charming book ever written about the fundamental nature of reality. Amanda Gefter sounds like your best friend telling you a captivating story, but really she’s teaching you about some of the deepest ideas in modern physics and cosmology. Trespassing on Einstein’s Lawn is a delight from start to finish.”—Sean Carroll, theoretical physicist and author of The Particle at the End of the Universe

“Amanda Gefter is a remarkable explorer, and Trespassing on Einstein’s Lawn takes the reader on a journey into the unexpected. Follow this beautifully written quest as it leads you through the terrain of physics, of family, of history, and you will find yourself pondering all the roads that lead to a richer understanding of ourselves and our place in this endlessly strange and beautiful universe.”—Deborah Blum, Pulitzer Prize–winning journalist and author of The Poisoner’s Handbook: Murder and the Birth of Forensic Medicine in Jazz Age New York

“I devoured Trespassing on Einstein’s Lawn in a weekend, marveling at how the author went from being a coat-check girl at a Manhattan nightclub to going up against some of the greatest physicists alive and explaining their wild and deep ideas often better than they could—and wittily, too.”—Jim Holt, New York Times bestselling author of Why Does the World Exist?

Amanda Gefter is a physics and cosmology writer and a consultant for New Scientist magazine, where she formerly served as books and arts editor and founded CultureLab. Her writing has been featured in New Scientist, Scientific American, Sky and Telescope, Astronomy.com, and The Philadelphia Inquirer. Gefter studied the history and philosophy of science at the London School of Economics and was a 2012–13 Knight Science Journalism Fellow at MIT. She lives in Cambridge, Massachusetts. This is her first book.
Loading...
or support indie stores by buying on