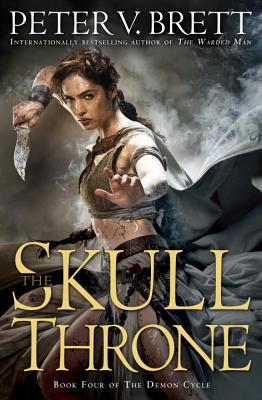 Book Four of the Demon Cycle

NEW YORK TIMES BESTSELLER - NAMED ONE OF THE BEST BOOKS OF THE YEAR BY BUZZFEED The first three novels in Peter V. Brett's groundbreaking Demon Cycle series--The Warded Man, The Desert Spear, and The Daylight War--set a new standard for heroic fantasy. The powerful saga of humans winnowed to the brink of extinction by night-stalking demons, and the survivors who fight back, has kept readers breathless as they eagerly turned the pages. Now the thrilling fourth volume, The Skull Throne, raises the stakes as it carries the action in shocking new directions. The Skull Throne of Krasia stands empty. Built from the skulls of fallen generals and demon princes, it is a seat of honor and ancient, powerful magic, keeping the demon corelings at bay. From atop the throne, Ahmann Jardir was meant to conquer the known world, forging its isolated peoples into a unified army to rise up and end the demon war once and for all. But Arlen Bales, the Warded Man, stood against this course, challenging Jardir to a duel he could not in honor refuse. Rather than risk defeat, Arlen cast them both from a precipice, leaving the world without a savior, and opening a struggle for succession that threatens to tear the Free Cities of Thesa apart. In the south, Inevera, Jardir's first wife, must find a way to keep their sons from killing one another and plunging their people into civil war as they strive for glory enough to make a claim on the throne. In the north, Leesha Paper and Rojer Inn struggle to forge an alliance between the duchies of Angiers and Miln against the Krasians before it is too late. Caught in the crossfire is the duchy of Lakton--rich and unprotected, ripe for conquest. All the while, the corelings have been growing stronger, and without Arlen and Jardir there may be none strong enough to stop them. Only Renna Bales may know more about the fate of the missing men, but she, too, has disappeared. . . . Look for Peter V. Brett's complete Demon Cycle:
THE WARDED MAN - THE DESERT SPEAR - THE DAYLIGHT WAR - THE SKULL THRONE - THE CORE (Coming soon ) Praise for Peter V. Brett's novels of The Demon Cycle The Warded Man "There is much to admire in Peter Brett's writing, and his concept is brilliant. There's action and suspense all the way."--Terry Brooks " A] fast-paced and thoroughly enjoyable dark fantasy."--The Miami Herald The Desert Spear "Inspired, compelling, and totally addictive: the most significant and cinematic fantasy epic since The Lord of the Rings."--Paul W. S. Anderson, director of Resident Evil: Afterlife "Fans of epic fantasy in the tradition of Robert Jordan and George R. R. Martin will enjoy the arrival of a strong voice in multivolume epic fantasy."--Library Journal The Daylight War "Highly entertaining, fast-paced, and action-packed."--SF Site " Brett is] at the top of his game."--Tor.com

The Skull Throne "Heart-thumping, adrenaline-pumping . . . The crescendo is near perfect."--Book Frivolity "As soon as we dive into The Skull Throne, it quickly becomes obvious that Brett knows exactly what he's doing. . . . Brett is setting up his world and the characters in order to tell his epic fantasy tale in a way that is both personal and global. It's a page-turner, and quite possibly the best so far."--Starburst Magazine

Peter V. Brett is the internationally bestselling author of The Warded Man, The Desert Spear, The Daylight War, and The Skull Throne. Raised on a steady diet of fantasy novels, comic books, and Dungeons & Dragons, Brett has been writing fantasy stories for as long as he can remember. He received a bachelor of arts degree in English literature and art history from the University at Buffalo in 1995, then spent more than a decade in pharmaceutical publishing before returning to his bliss. He lives in New York.
Loading...
or
Not Currently Available for Direct Purchase