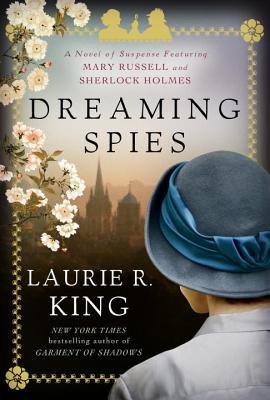 A Novel of Suspense Featuring Mary Russell and Sherlock Holmes

"NEW YORK TIMES" BESTSELLER WINNER OF THE AGATHA AWARD FOR BEST HISTORICAL NOVEL NAMED ONE OF THE TEN BEST MYSTERIES OF THE YEAR BY "THE SEATTLE TIMES
"
Laurie R. King snovels of suspense featuring Mary Russell and her husband, Sherlock Holmes, are critically acclaimed and beloved by readers for the author's adept interplay of history and adventure. Now the intrepid duo is finally trying to take a little time for themselves only to be swept up in a baffling case that will lead them from the idyllic panoramas of Japan to the depths of Oxford's most revered institution.
After a lengthy case that had the couple traipsing all over India, Mary Russell and Sherlock Holmes are on their way to California to deal with some family business that Russell has been neglecting for far too long. Along the way, they plan to break up the long voyage with a sojourn in southern Japan. The cruising steamer "Thomas Carlyle" is leaving Bombay, bound for Kobe. Though they re not the vacationing types, Russell is looking forward to a change of focus not to mention a chance to travel to a location Holmes has not visited before. The idea of the pair being on equal footing is enticing to a woman who often must race to catch up with her older, highly skilled husband.
Aboard the ship, intrigue stirs almost immediately. Holmes recognizes the famous clubman the Earl of Darley, whom he suspects of being an occasional blackmailer: not an unlikely career choice for a man richer in social connections than in pounds sterling. And then there's the lithe, surprisingly fluent young Japanese woman who befriends Russell and quotes haiku. She agrees to tutor the couple in Japanese language and customs, but Russell can t shake the feeling that Haruki Sato is not who she claims to be.
Once in Japan, Russell's suspicions are confirmed in a most surprising way. From the glorious city of Tokyo to the cavernous library at Oxford, Russell and Holmes race to solve a mystery involving international extortion, espionage, and the shocking secrets that, if revealed, could spark revolution and topple an empire.
Praise for "Dreaming Spies"
Holmes and Russell s] unusual partnership is, as always, a delight to observe, and King expertly combines rich historical detail, deftly drawn characters and taut suspense. For Holmes fans, mystery lovers and those interested in either Japan or Oxford, this novel is a multilayered and entirely enjoyable journey. "Shelf Awareness"
Compulsively readable . . . Through astute, precise, and elegant writing, great attention to time and place, and beautifully realized characters, King has created a mystery series that is at once intelligent, reflective, and action filled. "Library Journal"
A story that keeps the reader enthralled . . . one of the most consistently outstanding mystery series out there. Any time spent with the Russell-Holmes duo is a delight. "Booklist"
Snappy prose and a captivating plot distinguish King's fourteenth novel featuring Mary Russell and her husband, Sherlock Holmes. . . . Many will find the character deepened by his partnership with the spirited and clever Russell. "Publishers Weekly"
The author continues to offer up incredible plotlines. . . . Holmes and Russell s] emotional bond only adds to the magic, suspense, and beauty of the original creation. King's imagination continues to shine "Suspense Magazine"
King] manages more surprises than usual in this graceful exercise in cultural tourism cum-intrigue. "Kirkus Reviews.