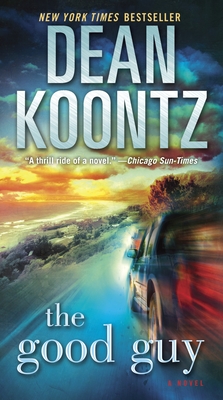 Timothy Carrier is an ordinary guy who enjoys a beer after work. But tonight is no ordinary night. Instead, Tim will face a terrifying decision: Help or run. For the jittery stranger sitting beside him at the bar has mistaken Tim for someone else—and passes him a manila envelope stuffed with cash and the photo of a pretty woman. “Ten thousand. The rest when she’s gone.”

Now everything Tim thinks he knows—even about himself—will be challenged. For Tim Carrier is the one man who can save an innocent life and stop a killer as relentless as evil incarnate. But first he must discover resources within himself that will transform his idea of who he is and what it takes to be the good guy.

BONUS: This edition contains an excerpt from Dean Koontz's The City.

Praise For The Good Guy: A Novel…

“A thrill ride of a novel.”—Chicago Sun-Times

“Dean Koontz is a master of his craft. . . . He creates . . . one of his trademark good guys [and] one of the most interesting serial killers ever to grace the printed page.”—The Times-Picayune

“The suspense relentlessly mounts with each chapter. . . . Koontz writes thrillers that move so fast they make every other thriller writer seem to be standing still.”—The Denver Post

“A thriller so compelling many readers will race through the book in one sitting . . . The novel’s breathless pacing, clever twists and adroit characterizations all add up to superior entertainment.”—Publishers Weekly (starred review)