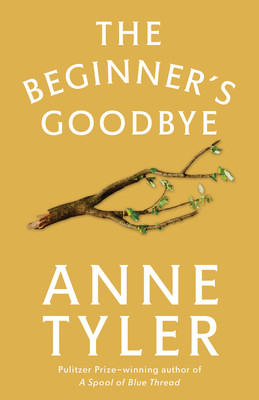 Pulitzer Prize–winning author Anne Tyler gives us a wise, haunting, and deeply moving new novel about loss and recovery, pierced throughout with her humor, wisdom, and always penetrating look at human foibles.

Crippled in his right arm and leg, Aaron grew up fending off a sister who constantly wanted to manage him. So when he meets Dorothy, an outspoken, independent young woman, she’s like a breath of fresh air. He marries her without hesitation, and they have a relatively happy, unremarkable marriage. Aaron works at his family’s vanity-publishing business, turning out titles that presume to guide beginners through the trials of life. But when a tree crashes into their house and Dorothy is killed, Aaron feels as though he has been erased forever. Only Dorothy’s unexpected appearances from the dead—in their house, on the roadway, in the market—help him to live in the moment and to find some peace. Gradually, Aaron discovers that maybe for this beginner there is indeed a way to say goodbye.

“An absolute charmer of a novel . . . With sparkling prose . . . [Anne] Tyler gets at the beating heart of what it means to lose someone, to say goodbye.”—The Boston Globe

“Classic Tyler . . . The wonder of Anne Tyler is how consistently clear-eyed and truthful she remains about the nature of families and especially marriage.”—Los Angeles Times

“Beautifully intricate . . . By the exquisitely romantic emotional climax [an] ordinary life has bloomed into an opera.”—Entertainment Weekly

Anne Tyler was born in Minneapolis, Minnesota, in 1941 and grew up in Raleigh, North Carolina. This is her nineteenth novel; her eleventh, Breathing Lessons, was awarded the Pulitzer Prize in 1988. She is a member of the American Academy of Arts and Letters. She lives in Baltimore, Maryland.

Praise For The Beginner's Goodbye: A Novel…

Aaron is handicapped on his right side as a result of a child- hood illness. Why do you think the author chose to give her main character such a handicap? Is it significant—a symbol or metaphor—or entirely coincidental? In her conversation with Robb Foreman Dew, Tyler comments that Aaron may be trying to hide his handicap and suggests there is a reason he does so. What do you think the reason is?

Does the way that Aaron’s mother and sister treated him when he was growing up impact his character as an adult? Or explain why he might have married Dorothy?

In Aaron’s recollections of initially meeting Dorothy and falling in love with her, he portrays himself as having been immediately besotted, though Dorothy herself seems less than scintillating. Is Aaron aware of this discrepancy?

After Dorothy’s death, does Aaron fully grieve for her, or is he reluctant to accept what has happened?

Why does Dorothy reappear so many months after her death? And why does she appear only to Aaron?

Aaron states early in the book (pages 11–12) that he is an atheist. Does this (lack of ) belief shed any light on Dorothy’s appearances?