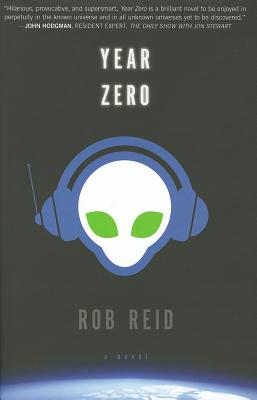 An alien advance party was suddenly nosing around my planet.
Worse, they were lawyering up. . . .

In the hilarious tradition of The Hitchhiker’s Guide to the Galaxy, Rob Reid takes you on a headlong journey through the outer reaches of the universe—and the inner workings of our absurdly dysfunctional music industry.

Low-level entertainment lawyer Nick Carter thinks it’s a prank, not an alien encounter, when a redheaded mullah and a curvaceous nun show up at his office. But Frampton and Carly are highly advanced (if bumbling) extraterrestrials. And boy, do they have news.

The entire cosmos, they tell him, has been hopelessly hooked on humanity’s music ever since “Year Zero” (1977 to us), when American pop songs first reached alien ears. This addiction has driven a vast intergalactic society to commit the biggest copyright violation since the Big Bang. The resulting fines and penalties have bankrupted the whole universe. We humans suddenly own everything—and the aliens are not amused.

Nick Carter has just been tapped to clean up this mess before things get ugly, and he’s an unlikely galaxy-hopping hero: He’s scared of heights. He’s also about to be fired. And he happens to have the same name as a Backstreet Boy. But he does know a thing or two about copyright law. And he’s packing a couple of other pencil-pushing superpowers that could come in handy.

Soon he’s on the run from a sinister parrot and a highly combustible vacuum cleaner. With Carly and Frampton as his guides, Nick now has forty-eight hours to save humanity, while hopefully wowing the hot girl who lives down the hall from him.

“Hilarious, provocative, and supersmart, Year Zero is a brilliant novel to be enjoyed in perpetuity in the known universe and in all unknown universes yet to be discovered.”—John Hodgman, resident expert, The Daily Show with Jon Stewart

“Hilarious, provocative, and supersmart, Year Zero is a brilliant novel to be enjoyed in perpetuity in the known universe and in all unknown universes yet to be discovered.”
John Hodgman, resident expert, The Daily Show with Jon Stewart

“Reid’s extreme imagination never wanes as he builds an entire universe solely on how alien societies would react to our music and culture. Nothing is typical or obvious. Reid uses the lens of an outsider to unleash a sarcastic—and hilarious—rant on how obsessed we are with technology and greed.”
Associated Press

“I loved it. Funny, smart, silly . . . three things I also happen to admire in a novel. Bottom line: recommended. Buy it and read it.”
Phil Plait, Discover Magazine

“Year Zero made me laugh out loud and taught me stuff about copyright infringement: It’s clever, smart, and so original that people are probably already trying to rip it off.”
Charles Yu, author of How to Live Safely in a Science Fictional Universe

“All in all, it’s a supremely fun read which will remind you how much you love science fiction comedy—and how much you hate the music industry.”
io9

“My pick for best (and funniest) sci-fi book of the year.”
Chris Anderson, editor in chief, Wired

“Hailed as this summer’s best beach read for science fiction and music geeks . . . It’s an often hilarious satire on much of current entertainment, including reality TV, the legal profession and fandom (interstellar and otherwise), but the book’s crowning achievement is that it actually makes copyright funny.”
Toronto Star

“Year Zero is ROFLMAO funny, insightful, and sly: A sort of Hitchhiker’s Guide to our own tortured commercial/litigation culture, by way of planet Zinkiwu.”
Mark Jannot, editor in chief, Popular Science

“Fans of Douglas Adams will rave about this smart, funny satire. Debut novelist Reid, founder of Listen.com, has crafted a masterly plot that deftly skewers the American obsession with music, money, and power. Fast paced and original, this is highly recommended.”
Library Journal (starred review)

“Witty and original—I loved it. A biting satire of the record business and those who run it . . . and ultimately ran it into the ground.”
Cliff Bleszinski, creator, Gears of War

“With chess master precision, the refreshingly ray gun-free novel wittily plays with the possibilities of its fantastical plot. It mixes airtight point-and-counter point rounds of arguments with wild travails to distant worlds. The careful cohesion of Year Zero is a marvel given its star-hopping digressions.”
Buffalo News

“What if aliens heard our music—and really liked it? You could ‘what if’ for the next millennium and still not come up with as many zany scenarios as Rob Reid does in this tale of copyright law, astrophysics, biophysics, and crazy physics that hasn’t yet been invented. So sit back, hold your sides to ease the laughing pains, and find out whether Earth survives.”
Jill Tarter, director, Center for SETI Research

“Awesome. Think Hitchhikers Guide to the Galaxy, but with copyright law driving a major plot line. A mainstream humorous sci-fi novel that uses the Berne Convention as a key plot point and tosses aside casual references to Larry Lessig and Fark? Yes. Count me in.”
Techdirt

“Year Zero is a brilliant satire of the American entertainment industry, and I never stopped grinning.”
Kevin Hearne, author of The Iron Druid Chronicles

“The fun in Year Zero comes from the banter among the main characters, all of whom are well drawn and hilarious in their own right. While the novel satirizes the music industry, it’s obvious the author feels as passionately as some of the alien characters about the power of pop music.”
Shelf Awareness

Rob Reid is the founder of Listen.com, which created the Rhapsody service, the world's largest seller of online music until it was eclipsed (rather badly, he'll admit) by Apple's iTunes service. He is the author of "Year One, "a memoir about student life at Harvard Business School, and "Architects of the Web, " a business history of the Internet. He lives in the Los Angeles area with his wife, Morgan.
Loading...
or
Not Currently Available for Direct Purchase