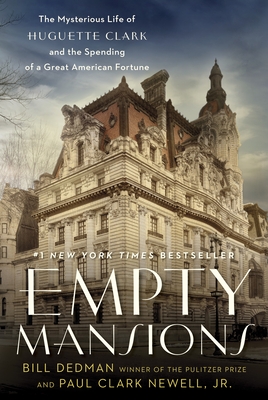 NAMED ONE OF THE BEST BOOKS OF THE YEAR BY
Janet Maslin, The New York Times • St. Louis Post-Dispatch

Praise For Empty Mansions: The Mysterious Life of Huguette Clark and the Spending of a Great American Fortune…

“A fascinating investigation into the haunting true-life tale of reclusive heiress Huguette Clark.”—People

“A compelling account of what happened to the Clark family and its fortune . . . a tremendous feat.”—St. Louis Post-Dispatch

“Riveting . . . deliciously scandalous . . . a thrilling study of the responsibilities and privileges that come with great wealth.”—Publishers Weekly (starred review)

“Empty Mansions is a dazzlement and a wonder. Bill Dedman and Paul Newell unravel a great character, Huguette Clark, a shy soul akin to Boo Radley in To Kill a Mockingbird—if Boo’s father had been as rich as Rockefeller. This is an enchanting journey into the mysteries of the mind, a true-to-life exploration of strangeness and delight.”—Pat Conroy, author of The Death of Santini: The Story of a Father and His Son

“Empty Mansions is at once an engrossing portrait of a forgotten American heiress and a fascinating meditation on the crosswinds of extreme wealth. Hugely entertaining and well researched, Empty Mansions is a fabulous read.”—Amanda Foreman, author of A World on Fire

“In Empty Mansions, a unique American character emerges from the shadows. Through deep research and evocative writing, Bill Dedman and Paul Clark Newell, Jr., have expertly captured the arc of history covered by the remarkable Clark family, while solving a deeply personal mystery of wealth and eccentricity.”—Jon Meacham, author of Thomas Jefferson: The Art of Power

“Who knew? Though virtually unknown today, W. A. Clark was one of the fifty richest Americans ever—copper baron, railroad builder, art collector, U.S. senator, and world-class scoundrel. Yet his daughter and heiress Huguette became a bizarre recluse. Empty Mansions reveals this mysterious family in sumptuous detail.”—John Berendt, author of Midnight in the Garden of Good and Evil

“Empty Mansions is a mesmerizing tale that delivers all the ingredients of a top-notch mystery novel. But there is nothing fictional about this true, fully researched story of a fascinating and reclusive woman from an era of fabulous American wealth. Empty Mansions is a delicious read—once you start it, you will find it hard to put down.”—Kate Alcott, bestselling author of The Dressmaker

“More than a biography, more than a mystery, Empty Mansions is a real-life American Bleak House, an arresting tale about misplaced souls sketched on a canvas that stretches from coast to coast, from riotous mining camps to the gilded dwellings of the very, very rich.”—John A. Farrell, author of Clarence Darrow: Attorney for the Damned

Bill Dedman introduced the public to heiress Huguette Clark and her empty mansions through his compelling series of narratives for NBC, which became the most popular feature in the history of its news website, topping 110 million page views. He received the 1989 Pulitzer Prize in investigative reporting while writing for The Atlanta Journal-Constitution and has written for The New York Times, The Washington Post, and The Boston Globe.

Paul Clark Newell, Jr., a cousin of Huguette Clark, has researched the Clark family history for twenty years, sharing many conversations with Huguette about her life and family. He received a rare private tour of Bellosguardo, her mysterious estate overlooking the Pacific Ocean in Santa Barbara.