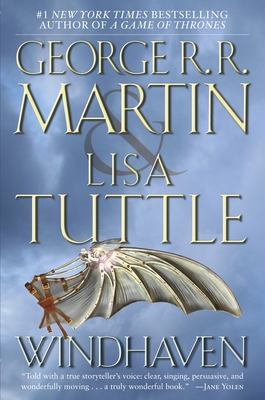 From #1 New York Times bestselling author George R. R. Martin and acclaimed author Lisa Tuttle comes a timeless tale that brilliantly renders the struggle between the ironbound world of tradition and a rebellious soul seeking to prove the power of a dream.

Among the scattered islands that make up the water world of Windhaven, no one holds more prestige than the silver-winged flyers, romantic figures who cross treacherous oceans, braving shifting winds and sudden storms, to bring news, gossip, songs, and stories to a waiting populace. Maris of Amberly, a fisherman’s daughter, wants nothing more than to soar on the currents high above Windhaven. So she challenges tradition, demanding that flyers be chosen by merit rather than inheritance. But even after winning that bitter battle, Maris finds that her troubles are only beginning. Now a revolution threatens to destroy the world she fought so hard to join—and force her to make the ultimate sacrifice.

“Martin and Tuttle make wonderful professional music together . . . shifting easily from moments of almost unbearable tension to others of sheer poetry and exhilaration.”—Fort Worth Star-Telegram

“A powerful flight of the imagination . . . an entirely enjoyable reading experience, wrought by a pair of writers noted for excellence.”—Roger Zelazny

“I didn’t mean to stay up all night to finish Windhaven, but I had to!”—Anne McCaffrey


Praise For Windhaven: A Novel…

"A powerful flight of the imagination ... wrought by a pair of writers noted for excellence."—Roger Zelazny

"Told with a true storyteller's voice: clear, singing, persuasive, and wonderfully moving. They have made a mythic land and peopled it with unforgettable characters. It is a book for adults and children who have dreamed of flying with their own wings, and for story listeners of all ages for whom dreams are as potent as realities. A truly wonderful book."—Jane Yolen

"It's a romance. It's science fantasy. It's beautiful."—A.E. van Vogt

"The pace never slackens, shifting easily from moments of almost unbearable tension to others of sheer poetry and exhilaration. Martin and Tuttle make wonderful professional music together."
-- Fort Worth Star-Telegram


For George R. R. Martin's A Game of Thrones:

"A grand feast and pageant: George R. R. Martin has unveiled for us an intensely realized, romantic but realistic world."-- Chicago Sun-Times

A Clash of Kings:

"Destined to be one of the best fantasy series ever written."-- The Denver Post

"Rivals T. H. White's The Once and Future King."-- The Des Moines Register

For Lisa Tuttle's The Pillow Friend:

"A disturbing novel about dreams and wishes, a nightmarish distaff monkey's paw of a book that it's impossible to forget. Lisa Tuttle remains our preeminent chronicler of family madness and desire."-- Neil Gaiman

"Stunning. This novel shows us that what we hide from ourselves, and what we make up, may be more real than reality itself."-- Library Journal

"Lisa Tuttle's best fiction is like a slow settling of vast planes of thought and emotion -- luminous, quiet, wry and often bitter. The edges almost always admit other worlds, sometimes horrific, whose full import may be revealed, fully and skillfully, in a single, telling line."-- Kathleen Ann Goonan, The New York Review of Science Fiction

Lisa Tuttle won the John W. Campbell Award for best new writer in 1974 and has since gone on to author numerous short stories and novels, including Lost Futures, which was short-listed for the Arthur C. Clarke Award, and The Pillow Friend. More recently she has written several books for children. Texas-born, she now lives with her husband and daughter in a remote area on the west coast of Scotland, where the scenery and weather are very similar to the seascapes of Windhaven.
Loading...
or
Not Currently Available for Direct Purchase