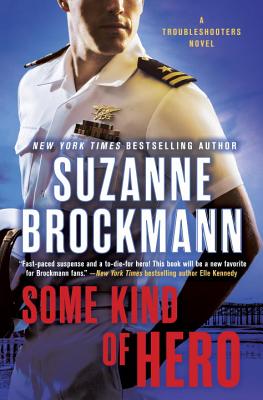 Some Kind of Hero

Navy men don’t come tougher than Lieutenant Peter Greene. Every day he whips hotshot SEAL wannabes into elite fighters. So why can’t he handle one fifteen-year-old girl? His ex’s death left him a single dad overnight, and very unprepared. Though he can’t relate to an angsty teen, he can at least keep Maddie safe—until the day she disappears. Though Pete’s lacking in fatherly intuition, his instinct for detecting danger is razor sharp. Maddie’s in trouble. Now he needs the Troubleshooters team at his back, along with an unconventional ally.

Romance writer Shayla Whitman never expected to be drawn into a real-world thriller—or to meet a hero who makes her pulse pound. Action on the page is one thing. Actually living it is another story. Shay’s not as bold as her heroines, but she’s a mother. She sees the panic in her new neighbor’s usually fearless blue eyes—and knows there’s no greater terror for a parent than having a child at risk. It’s an ordeal Shay won’t let Pete face alone. She’s no highly trained operative, but she’s smart, resourceful, and knows what makes teenagers tick.

Still, working alongside Pete has its own perils—like letting the heat between them rise out of control. Intimate emotions could mean dangerous, even deadly, consequences for their mission. No matter what, they must be on top of their game, and playing for keeps . . . or else Pete’s daughter may be gone for good.

Praise for Some Kind of Hero

“Well worth the wait. Jam-packed with adrenaline-fueled action and sizzling sexual tension, this is grade-A romantic suspense that will delight RITA award–winning Brockmann’s dedicated core of fans as well, and lure new readers.”—Booklist (starred review)

Praise For Some Kind of Hero: A Troubleshooters Novel…

“Well worth the wait. Jam-packed with adrenaline-fueled action and sizzling sexual tension, this is grade-A romantic suspense that will delight RITA award–winning Brockmann’s dedicated core of fans as well, and lure new readers.”—Booklist (starred review)

“Brockmann brings her typical storytelling virtuosity to this new setting and also delves into the dark history of the Japanese internment during World War II and subtly comments on domestic abuse as well as society’s continuing racial prejudices through the characters’ experiences. . . . A thought-provoking, deeply satisfying romance from a master of the genre.”—Kirkus Reviews (starred review)

“A triumphant return to the Troubleshooters world.”—Romance Novel Reviews

“Nobody does it better! Some Kind of Hero is Suzanne Brockmann at the top of her game, with a story full of heartstopping action and genuine, funny, heartfelt emotion.”—New York Times bestselling author Virginia Kantra

“In classic Brockmann style, Some Kind of Hero does not shy away from the controversies of our times. Instead, it faces them head on, delivering a thought-provoking, high-octane love story with a hero and heroine one can’t help but root for. Prepare to be blown away.”—USA Today bestselling author Farrah Rochon

“Delicious sexual tension and a fast-paced plot made me want Some Kind of Hero to last way past the final page.”—USA Today bestselling author Megan Erickson

“Brockmann is a master at romantic suspense. Sexy, smart, and completely original, Some Kind of Hero is not to be missed.”—HelenKay Dimon, award-winning author of the Tough Love series

“The writer in me can’t believe that Brockmann keeps getting better with every book. The reader in me loves it!”—M. L. Buchman, author of The Night Stalkers series and Delta Force series

“Fast-paced suspense and a to-die-for hero! This book will be a new favorite for [Suzanne] Brockmann fans.”—New York Times bestselling author Elle Kennedy

“A thought-provoking, deeply satisfying romance from a master of the genre.”—Kirkus Reviews (starred review)

Suzanne Brockmann is the New York Times bestselling author of more than fifty novels, including her award-winning Troubleshooters series, about Navy SEAL heroes and the women—and sometimes men—who win their hearts. In addition to writing books, Brockmann has co-produced several feature-length movies: the award-winning romantic comedy The Perfect Wedding, which she co-wrote with her husband, Ed Gaffney, and their son, Jason, and the upcoming thriller Russian Doll. She has also co-written two YA novels with her daughter, Melanie.
Loading...
or
Not Currently Available for Direct Purchase