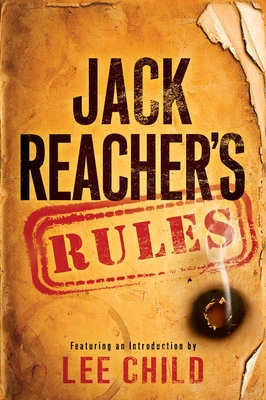 By Lee Child (Introduction by)

Jack Reacher’s Rules is the ultimate fan’s guide to the World of Reacher! Featuring selections from all seventeen electrifying Jack Reacher novels and an introduction from Lee Child himself, this one-of-a-kind book compiles timeless advice from maverick former army cop Jack Reacher, the hero of Lee Child’s blockbuster thrillers and now the star of a major motion picture.

My name is Jack Reacher.
No middle name, no address.
I’ve got a rule: People mess with me at their own risk.

You don’t have to break the rules if you make the rules. Case in point: Jack Reacher, the two-fisted, quick-witted, “current poster-boy of American crime fiction” (Los Angeles Times). The brainchild of #1 New York Times bestselling author Lee Child, Reacher is a freelance troubleshooter with a mysterious past—and a serious passion for justice.  Now the hard-won knowledge and hard-hitting strategies of fiction’s toughest tough guy are within every thriller reader’s reach—in a rapid-fire rundown of the trade secrets, tried-and-true tricks, and time-honored tactics that separate the man in the street from the man to beat.

Rule 1. When in doubt, drink coffee.
Rule 2. Never volunteer for anything.
Rule 3. Don’t break the furniture.
Rule 4. Only one woman at a time.
Rule 5. Show them what they’re messing with.

Please note: Jack Reacher’s Rules is a compilation of advice, wisdom, and facts from the Jack Reacher series of novels by #1 New York Times bestselling author Lee Child. It features an introduction by Lee Child, but is not a Jack Reacher novel.

Jack Reacher is a former U.S. Army Military Police major. Since leaving the army, the authorities have not been able to locate him, although his name crops up mysteriously from time to time in connection with investigations into murders, terrorism, and other breaches of the law.

Lee Child is the author of seventeen Jack Reacher thrillers, including the New York Times bestsellers Persuader, The Enemy, One Shot, and The Hard Way, and the #1 bestsellers The Affair, Worth Dying For, 61 Hours, Gone Tomorrow, Bad Luck and Trouble, and Nothing to Lose, as well as the short stories “Second Son” and “Deep Down.” His debut, Killing Floor, won both the Anthony and the Barry awards for Best First Mystery, and The Enemy won both the Barry and Nero awards for Best Novel. Foreign rights in the Reacher series have sold in more than forty territories. All titles have been optioned for major motion pictures, and Jack Reacher, based on the novel One Shot and starring Tom Cruise, will be released in December 2012. A native of England and a former television director, Child lives in New York City, where he is at work on his next thriller, Never Go Back.
or
Buy Here
Copyright © 2020 American Booksellers Association