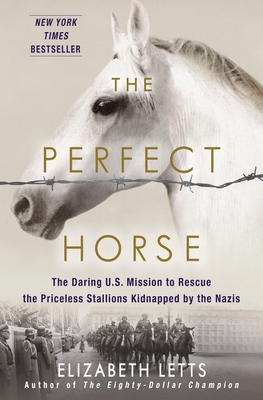 The Daring U.S. Mission to Rescue the Priceless Stallions Kidnapped by the Nazis

NEW YORK TIMES BESTSELLER • From the author of The Eighty-Dollar Champion, the remarkable story of the heroic rescue of priceless horses in the closing days of World War II

WINNER OF THE PEN AWARD FOR RESEARCH NONFICTION

In the chaotic last days of the war, a small troop of battle-weary American soldiers captures a German spy and makes an astonishing find—his briefcase is empty but for photos of beautiful white horses that have been stolen and kept on a secret farm behind enemy lines. Hitler has stockpiled the world’s finest purebreds in order to breed the perfect military machine—an equine master race. But with the starving Russian army closing in, the animals are in imminent danger of being slaughtered for food.

With only hours to spare, one of the U.S. Army’s last great cavalrymen, Colonel Hank Reed, makes a bold decision—with General George Patton’s blessing—to mount a covert rescue operation. Racing against time, Reed’s small but determined force of soldiers, aided by several turncoat Germans, steals across enemy lines in a last-ditch effort to save the horses.

Pulling together this multistranded story, Elizabeth Letts introduces us to an unforgettable cast of characters: Alois Podhajsky, director of the famed Spanish Riding School of Vienna, a former Olympic medalist who is forced to flee the bomb-ravaged Austrian capital with his entire stable in tow; Gustav Rau, Hitler’s imperious chief of horse breeding, a proponent of eugenics who dreams of genetically engineering the perfect warhorse for Germany; and Tom Stewart, a senator’s son who makes a daring moonlight ride on a white stallion to secure the farm’s surrender.

A compelling account for animal lovers and World War II buffs alike, The Perfect Horse tells for the first time the full story of these events. Elizabeth Letts’s exhilarating tale of behind-enemy-lines adventure, courage, and sacrifice brings to life one of the most inspiring chapters in the annals of human valor.

Praise for The Perfect Horse

“Winningly readable . . . Letts captures both the personalities and the stakes of this daring mission with such a sharp ear for drama that the whole second half of the book reads like a WWII thriller dreamed up by Alan Furst or Len Deighton. . . . The right director could make a Hollywood classic out of this fairy tale.”—The Christian Science Monitor

“Letts, a lifelong equestrienne, eloquently brings together the many facets of this unlikely, poignant story underscoring the love and respect of man for horses.”—Kirkus Reviews

Praise For The Perfect Horse: The Daring U.S. Mission to Rescue the Priceless Stallions Kidnapped by the Nazis…

“Winningly readable . . . Letts captures both the personalities and the stakes of this daring mission with such a sharp ear for drama that the whole second half of the book reads like a WWII thriller dreamed up by Alan Furst or Len Deighton. . . . The right director could make a Hollywood classic out of this fairy tale.”—The Christian Science Monitor

“Hard to put down . . . One need not be an equestrian or horse lover in order to appreciate this story.”—New York Journal of Books

“The Perfect Horse raises the narrative bar. Applying her skills as a researcher, storyteller and horsewoman, Letts provides context that makes this account spellbinding.”—Culturess

“A wholly original, illuminating perspective on the war The Perfect Horse tells a fascinating story of bravery and benevolence that has gone far too long without reaching an audience. Full of action, heartbreak and well-developed characters, it has everything needed to be adapted into an outstanding war movie. To anyone with a love of horses or other animals, Letts’ fantastic, almost humanizing characterizations of some of the horses will make this book an instant favorite. And to history buffs, The Perfect Horse provides a totally fresh look at WWII that can’t be found anywhere else.”—Bookreporter

“An absorbing history of an unusual rescue mission in the closing days of the war in Europe . . . Letts does an excellent job of bringing the various players to life.”—BookPage

“A truly fascinating chronicle of a dedicated group of horsemen and the risks they were willing to take to preserve the equine icon that is the Lipizzaner. . . . I was hooked from start to finish by Letts’s incredible attention to detail and her gripping account of the events surrounding and leading up to the rescue mission.”—Horse Nation

“A brilliantly written story about Hitler’s effort to build an equine master race with the finest horses in Europe gathered in one place. As the end neared, these beautiful animals were within days of being slaughtered when a controversial covert mission was planned to rescue the horses and smuggle them to safety.”—PineStraw Magazine

“A riveting and touching piece of equestrian history beautifully told . . . [Letts makes] long dead characters come alive, revealing their passions and fears and flashes of uncommon valor for the sake of horses whose fate lay in their hands. The horses, too, are vivid and unforgettable. . . . Don’t miss it.”—EquiSearch

“[Elizabeth] Letts, a lifelong equestrienne, eloquently brings together the many facets of this unlikely, poignant story underscoring the love and respect of man for horses. . . . The author’s elegant narrative conveys how the love for these amazing creatures transcends national animosities.”—Kirkus Reviews

Elizabeth Letts is the #1 New York Times bestselling author of The Eighty-Dollar Champion as well as two novels, Quality of Care and Family Planning. A competitive equestrian in her youth, Letts rode for California in the North American Junior Three-Day Eventing Championships. She currently lives in Southern California.
Loading...
or
Not Currently Available for Direct Purchase