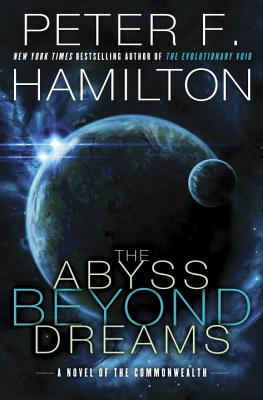 The Abyss Beyond Dreams

Bestselling science fiction master Peter F. Hamilton delivers the first of a two-book saga set in his popular Commonwealth universe. Distinguished by deft plotting, a teeming cast of characters, dazzling scientific speculation, and imagination that brings the truly alien to life, The Abyss Beyond Dreams reveals Hamilton as a storyteller of astonishing ingenuity and power.
The year is 3326. Nigel Sheldon, one of the founders of the Commonwealth, receives a visit from the Raiel self-appointed guardians of the Void, the enigmatic construct at the core of the galaxy that threatens the existence of all that lives. The Raiel convince Nigel to participate in a desperate scheme to infiltrate the Void.
Once inside, Nigel discovers that humans are not the only life-forms to have been sucked into the Void, where the laws of physics are subtly different and mental powers indistinguishable from magic are commonplace. The humans trapped there are afflicted by an alien species of biological mimics the Fallers that are intelligent but merciless killers.
Yet these same aliens may hold the key to destroying the threat of the Void forever if Nigel can uncover their secrets. As the Fallers relentless attacks continue, and the fragile human society splinters into civil war, Nigel must uncover the secrets of the Fallers before he is killed by the very people he has come to save.
Praise for The Abyss Beyond Dreams

The work of an author at the top of his game. Science Fiction and Fantasy World
Incredibly robust and exciting and rousing, sharing flavors of Jack Vance, John Wright, China Mieville, Orson Scott Card, and A. E. van Vogt . . . Hamilton's deployment of lots of grand super-science is utterly deft and convincing. Locus
Solidy engrossing fare . . . The characters, always Hamilton's strength, remain as distinctive as ever. Kirkus Reviews

Everything one wants in sf great characters, mind bending stuff, adventure, politics, romance, revolution . . . just superb. Fantasy Book Critic
Hamilton does a particular kind of planetary politics and space opera very well, and this is a perfect example of it. . . . The Abyss Beyond Dreams is] a satisfying and well-oiled story, with potential for more epic adventure to come. Booklist

Hugely enjoyable . . . Hamilton is so good at handling big plots, at maintaining forward momentum even as he throws in an unexpected twist and there's at least one doozy of a didn t-see-that-coming moment here. SFX

Peter F. Hamilton is the author of numerous novels, including Great North Road, The Evolutionary Void, The Temporal Void, The Dreaming Void, Judas Unchained, Pandora s Star, Misspent Youth, Fallen Dragon, and the acclaimed epic Night s Dawn trilogy (The Reality Dysfunction, The Neutronium Alchemist, and The Naked God). He lives with his family in England."
Loading...
or
Not Currently Available for Direct Purchase