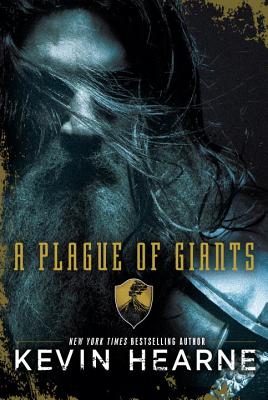 A Plague of Giants (Hardcover)

From the author of The Iron Druid Chronicles, a thrilling novel that kicks off a fantasy series with an entirely new mythology—complete with shape-shifting bards, fire-wielding giants, and children who can speak to astonishing beasts

MOTHER AND WARRIOR
Tallynd is a soldier who has already survived her toughest battle: losing her husband. But now she finds herself on the front lines of an invasion of giants, intent on wiping out the entire kingdom, including Tallynd’s two sons—all that she has left. The stakes have never been higher. If Tallynd fails, her boys may never become men.

SCHOLAR AND SPY
Dervan is an historian who longs for a simple, quiet life. But he’s drawn into intrigue when he’s hired to record the tales of a mysterious bard who may be a spy or even an assassin for a rival kingdom. As the bard shares his fantastical stories, Dervan makes a shocking discovery: He may have a connection to the tales, one that will bring his own secrets to light.

REBEL AND HERO
Abhi’s family have always been hunters, but Abhi wants to choose a different life for himself. Embarking on a journey of self-discovery, Abhi soon learns that his destiny is far greater than he imagined: a powerful new magic thrust upon him may hold the key to defeating the giants once and for all—if it doesn’t destroy him first.

Set in a magical world of terror and wonder, this novel is a deeply felt epic of courage and war, in which the fates of these characters intertwine—and where ordinary people become heroes, and their lives become legend.

“A spectacular work of epic fantasy . . . an absolute delight.”—Shelf Awareness

Praise For A Plague of Giants: A Novel…

“A spectacular work of epic fantasy . . . an absolute delight.”—Shelf Awareness

“You’ll laugh and cry and crave mustard as you’re immersed in the literal magic of storytelling in Kevin Hearne’s vivid new epic fantasy. I have experienced acute withdrawal symptoms since the book ended. I don’t want to leave this world.”—Beth Cato, author of Breath of Earth and The Clockwork Dagger

“A Plague of Giants is an absorbing epic fantasy, with clever storytelling that allows its many threads to each feel important, personal, and memorable. I’m very much looking forward to the sequel!”—James Islington, author of The Shadow of What Was Lost

“A Plague of Giants is a rare masterpiece that’s both current and timeless, groundbreaking yet traditional, merging the fantasy bones of Tolkien and Rothfuss with a wide cast of characters who’ll break your heart while reminding you of your humanity. This book truly resonates and will haunt you long after the last page.”—Delilah S. Dawson, author of Star Wars: Phasma
or
Not Currently Available for Direct Purchase
Copyright © 2020 American Booksellers Association