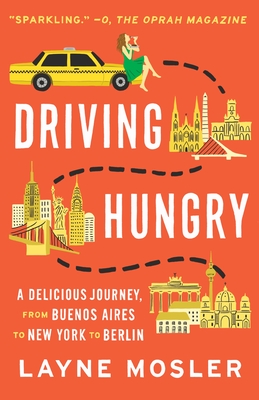 A Delicious Journey, from Buenos Aires to New York to Berlin (Vintage Departures)

Adrift in Buenos Aires, Layne Mosler was hungry—for an excellent (and cheap) meal, for a great story, for a new direction. A chance recommendation from a taxi driver helped her find all these things, and sparked a quest that would take her to three cities, meeting people from all walks of life, and finding an array of unexpected flavors. A story about following your passion, the pleasures of not always knowing your destination, and the beauty of chance encounters, Driving Hungry is a vivid, and inspiring, read from first to last.

“While there are descriptions of many wonderful and awful meals in this book, they never seem to be its real subject. This is likely true of many food books, but Mosler's is quite openly a quest for something more substantial. All the conversations with cab drivers about doner kebab, bife and baklava are just ways of looking for love.” —Chicago Tribune

“Mosler is a fantastic storyteller but also a talented food writer. . . . In Driving Hungry, Mosler builds relationships around food: the meals she enjoys are often solitary, but are always the product of—or the drive behind—a memorable interaction. Food, in other words, is not just a universal connector; it’s a universal language. It recalls A Moveable Feast, Hemingway’s seminal memoir of life in Paris in the 1920s. In both accounts, the primary interest is human interaction, but you get the clear sense that none of it would have happened—between Hemingway and Fitzgerald, or Mosler and her various drivers and passengers—if there hadn’t been a good dish on the table.” —The National Post, Canada

"An invigorating read, a paean to taking the serendipitous road to wherever it happens to lead.” —Booklist

“Driving Hungry brims with similarly tasty advice. And while it provides a gastronomic tour spanning three cities, the characters Ms. Mosler encounters are the true takeaway.” —The New York Observer

"Driving Hungry is wonderful. Whether she's tangoing at 5 a.m. in Buenos Aires or driving a cab at 5 a.m. on a New York winter morning or eating a dish called Dead Grandma in Berlin, Layne Mosler is an intrepid, charming, inspiring guide to life as it should be lived: with open-minded hunger, whether it's for goat roti, adventure, or true love.” —Kate Christenen, author of Blue Plate Special and How to Cook a Moose

“Building on the success of her blog, Taxi Gourmet, Mosler recounts the story of her transcontinental search for a vocation, which propelled the author into dancing in tango clubs in Buenos Aires, becoming a cab driver in New York City, and falling in love with the city of Berlin. . . . Mosler's lively and accessible writing style joyfully captures the satisfaction gained by trusting your instincts and seeking out new places, food, and people.” —Kirkus Reviews

LAYNE MOSLER has written for New York magazine, The Guardian/Observer, NPR Berlin, and the Travel Channel’s worldhum.com, among other venues. She lives in Berlin.
Loading...
or
Not Currently Available for Direct Purchase