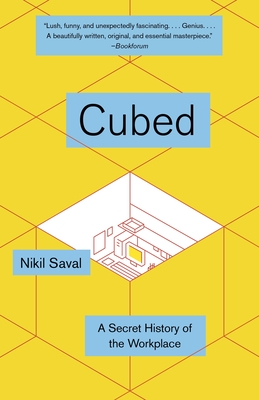 The Secret History of the Workplace

“Man is born free, but he is everywhere in cubicles.”

How did we get from Scrooge’s office to “Office Space”? From bookkeepers in dark countinghouses to freelancers in bright cafes?  What would the world be like without the vertical file cabinet? What would the world be like without the office at all? In Cubed, Nikil Saval chronicles the evolution of the office in a fascinating, often funny, and sometimes disturbing anatomy of the white-collar world and how it came to be the way it is. Drawing on the history of architecture and business, as well as a host of pop culture artifacts—from Mad Men to Dilbert (and, yes, The Office)—and ranging in time from the earliest clerical houses to the surprisingly utopian origins of the cubicle to the funhouse campuses of Silicon Valley, Cubed is an all-encompassing investigation into the way we work, why we do it the way we do (and often don’t like it), and how we might do better.


Praise For Cubed: The Secret History of the Workplace…

"... Excellent ... fresh and intellectually omnivorous ... Saval is a vigorous writer, and a thoughtful one. What puts him above the rank of most nonfiction authors, even some of the better ones, is that he doesn’t merely present information. He turns each new fact over in his mind, right in front of you, holding it to the light."
—Dwight Garner, The New York Times

"Cubed is...a pleasure to read: beautifully written and clearly organized. Since many Americans now, women as well as men, spend more than half their waking hours at work, it's also an important exploration."
—Richard Sennett, The New York Times Book Review

"Lush, funny, and unexpectedly fascinating ... [G]enius ... Cubed stands as one of those books readers can open to any page and find the kind of insight they’ll want to yank strangers out of their bus or subway seats and repeat ... [A] beautifully written, original, and essential masterpiece."
—Jerry Stahl, Bookforum

"Thorough and diligent...Saval works hard, and effectively, to demonstrate how the evolution of workspaces paralleled social shifts in the workforce that we’re still living out.... Saval is a tireless researcher, and he turns phrases with a flair that would get an Organization Man fired."
—Jennifer Howard, The Washington Post Book World

"Nikil Saval's new book, Cubed: A Secret History of the Workplace, is a fascinating guide to the intellectual history of the American office. Part cultural history, part architectural analysis and part management theory—with some labor economics, gender studies and pop culture thrown in for good measure—the book is a smart look at the evolution of the place where we spend so much of our lives."
—The Washington Post

"In his first book, Saval sets out to chronicle the evolution of the American office from airless prison to what it is today, reflecting upon the transformation of the office worker from emasculated novelty to unremarkable figure of ubiquity. To accomplish this, he synthesizes an impressive number of books, films, articles, and first-person accounts relating to the daunting number of historical forces and ideologies that have shaped white-collar work: architecture, philosophy, labor disputes, class conflict, the women’s movement, and technological advances, just to name a few. Saval considers each of them, forming a cogent and compelling narrative that could very easily have been scattered or deathly dull. To keep things lively, Saval deploys deft analytical skills and a tone that’s frequently bemused, making difficult and important concepts palatable to the casual reader."
—The Boston Globe

"Over the past week, as I've been carrying around a copy of Nikil Saval's Cubed: A Secret History of the Workplace, I've gotten some quizzical looks. 'It's a history of the office,' I'd explain, whereupon a good number of people would respond, 'Well, that sounds boring.' It isn't. In fact, Cubed is anything but... Saval's book glides smoothly between his two primary subjects: the physical structure of offices and the social institutions of white-collar work over the past 150 years or so. Cubed encompasses everything from the rise of the skyscraper to the entrance of women in the workplace to the mid-20th-century angst over grey-flannel-suit conformity to the dorm-like 'fun' workplaces of Silicon Valley. His stance is skeptical, a welcome approach given that most writings on the contemporary workplace are rife with dubious claims to revolutionary innovation—office design or management gimmicks that bestselling authors indiscriminately pounce on like magpies seizing glittering bits of trash."
—Salon.com

"Five days a week I commute to a skyscraper in the main business district of a large city and sit at a desk within whispering distance of another desk. Whatever the word 'work' used to conjure, my version is now quite standard. About 40 million Americans make a living in some sort of cubicle. Are we happy about that? The likelihood that we are not is central to Nikil Saval's impressive debut, Cubed: A Secret History of the Workplace."
—The New Republic

"... Formidable ... Beautifully rendered ... Sections of the book shine—especially when it discusses gender in the workplace ... The elegance of his prose and the intensity of his moral commitment linger."
—The Nation

"... Cubed is so stimulating, so filled with terrific material and shrewd observations, that it’s a must-read for anyone pondering how America arrived at its current state of white-collar under-employment and economic insecurity."
—The Daily Beast

"...[A] sharp and absorbing history of the office."
—The Economist

"Saval's book... stands out as one of the best pop histories to come out in years, and on a topic that most of us (statistically speaking) can relate to."
—Fast Company

"[An] absorbing history of office life...It sits cheerily between the academic and the journalistic register...Saval's style is nicely spiked with colloquialism... [His] debunking temper serves him well."
—The Guardian

"... An entertaining read ... Saval's readings of pop culture representations of the office and its workers add a lively and ironic perspective."
—Publishers Weekly

"A sprightly historical tour of the vexed, overplanned world of the modern workplace."
—In These Times

“Marvellous… in the vein of Barbara Ehrenreich’s brilliant renderings of the ‘Inner Life of the Middle Class’… Saval’s accom­plishment is to restore the strangeness of the common cube.”
—Michael Denning, New Left Review

“Why did no one write this necessary book before now? Never mind: it wouldn’t have been as good. Cubed has that combination of inevitability and surprise that marks the best writing—and thinking.”
—Benjamin Kunkel, author of Indecision

“Required reading for anyone who works in an office, and for those fortunate enough to have escaped.”
—Ed Park, author of Personal Days

"Nikil Saval is a superstar! He does for offices what Foucault did for prisons and hospitals, transforming a seemingly static, purely functional, self-evident institution into a rich human story, full of good and bad intentions, chance, and historical forces. Reading Cubed is like watching an amazing magic trick where the very boringness of the office turns out to be what is the most interesting. I found myself wishing he would do waiting rooms next."
—Elif Batuman, author of The Possessed

Nikil Saval, an editor of n+1, lives in Philadelphia.