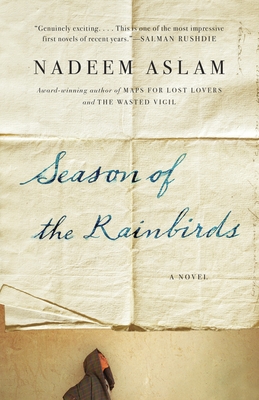 Season of the Rainbirds (Vintage International)

From the author of Maps for Lost Lovers, which was long-listed for the Man Booker Prize, Aslam’s exquisite first novel, the powerful story of a secluded Pakistani village after the murder of its corrupt and prominent judge.

Judge Anwar’s murder sets the people of the village on edge. Their anxieties are compounded when a sack of letters, thought lost in a train crash nineteen years ago, suddenly reappears under mysterious circumstances. What secrets will these letters bring to light? Could the letters shed any light on Judge Anwar’s murder? As Aslam traces the murder investigation over the next eleven days, he explores the impact that these two events have on the town’s inhabitants—from Judge Anwar’s surviving family to the journalist reporting on the delivery of the mail packet. With masterful attention to detail and beautiful scenes that set the rhythms of daily life in Pakistan, Aslam creates a lush and timeless world—played out against an ominous backdrop of religious tensions, assassinations, changing regimes, and faraway civil wars.

Praise For Season of the Rainbirds (Vintage International)…

Praise for Nadeem Aslam and Season of the Rainbirds

“Genuinely exciting. . . . This is one of the most impressive first novels of recent years.” —Salman Rushdie

“[Aslam] has emerged as one of the most exciting and serious British novelists writing now.” —Colm Tóibín

“A model of compact unadorned storytelling.” —The Observer (London)

“Aslam quietly captures his country’s oppressive past and the ferocity of its religious schisms.” —The Independent (London)

“Aslam lovingly explores the daily rhythms and beauties of the Islamic life of his youth, while providing insight into the turbulent modern history of his native land.” —Publishers Weekly

“Extraordinary. . . . Aslam has created a novel which—grave yet exultant, brutal but compassionate—achieves its complex humanity, and its final affirmations of love and beauty, through a real reckoning with despair and heartbreak.” —Pankaj Mishra, New York Review of Books

“Stylistically dazzling, full of poetic, richly descriptive and tender passages. . . . His characters’ inner lives are explored in-depth, flaws and all. . . . A novel as affecting as it is provocative.” —Los Angeles Times Book Review

Nadeem Aslam is the author of three highly acclaimed novels: Season of the Rainbirds, which won a Betty Trask Award; Maps for Lost Lovers, which was a New York Times Notable Book, winner of the Kiriyama Prize, shortlisted for the IMPAC prize, and longlisted for the Booker Prize; and, most recently, The Wasted Vigil. He is also the recipient of a Lannan Literary Fellowship. Born in Pakistan, he lives in England.
Loading...
or
Not Currently Available for Direct Purchase