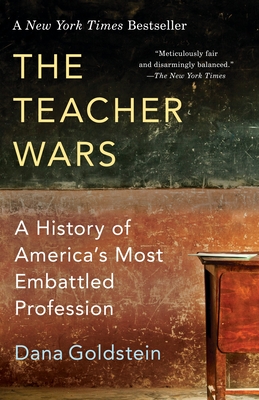 A History of America's Most Embattled Profession

In her groundbreaking history of 175 years of American education, Dana Goldstein finds answers in the past to the controversies that plague our public schools today.

In The Teacher Wars, a rich, lively, and unprecedented history of public school teaching, Dana Goldstein reveals that teachers have been embattled for nearly two centuries. She uncovers the surprising roots of hot button issues, from teacher tenure to charter schools, and finds that recent popular ideas to improve schools—instituting merit pay, evaluating teachers by student test scores, ranking and firing veteran teachers, and recruiting “elite” graduates to teach—are all approaches that have been tried in the past without producing widespread change. The Teacher Wars upends the conversation about American education by bringing the lessons of history to bear on the dilemmas we confront today. By asking “How did we get here?” Dana Goldstein brilliantly illuminates the path forward.

DANA GOLDSTEIN comes from a family of public school educators. She received the Spencer Fellowship in Education Journalism, a Schwarz Fellowship at the New America Foundation, and a Puffin Foundation Writing Fellowship at the Nation Institute. Her journalism is regularly featured in Slate, The Atlantic, The Nation, The Daily Beast, and other publications, and she is a staff writer at The Marshall Project. She lives in New York City. Her social policy blog is danagoldstein.com.

Praise For The Teacher Wars: A History of America's Most Embattled Profession…

“Ms. Goldstein’s book is meticulously fair and disarmingly balanced, serving up historical commentary instead of a searing philippic ... The book skips nimbly from history to on-the-ground reporting to policy prescription, never falling on its face. If I were still teaching, I’d leave my tattered copy by the sputtering Xerox machine. I’d also recommend it to the average citizen who wants to know why Robert can’t read, and Allison can’t add." —New York Times

“[A] lively account of the history of teaching. . . . The Teacher Wars suggests that to improve our schools, we have to help teachers do their job the way higher-achieving nations do: by providing ­better preservice instruction, offering newcomers more support from well-trained mentors and opening up the ‘black box’ classroom so teachers can observe one another without fear and share ideas. Stressing accountability, with no ideas for improving teaching, Goldstein says, is ‘ike the hope that buying a scale will result in losing weight.’ Such books may be sounding the closing bell on an era when the big ideas in school reform came from economists and solutions were sought in spreadsheets of test data.” —New York Times Book Review

“Goldstein presents detailed case studies from different periods that should give pause to any contemporary reformer who claims to know exactly how to fix public schools in America. Her careful historical analysis reveals certain lessons useful to anyone shaping policy, from principals to legislators . . . thorough and nuanced.” —San Francisco Chronicle

“Dana Goldstein’s The Teacher Wars is the product of just what the teaching corps needs more of: open-minded, well-informed, sympathetic scrutiny that doesn’t shrink from exposing systemic problems and doesn’t peddle faddish solutions either.” —The Atlantic

“Engaging. . . . Goldstein ably sketches reformers past and present, asserting that the common force behind each new wave of school reforms is evangelical conviction, and that new movements often seem based more on faith than on factual evidence . . . her ability to illuminate each new wave’s ‘hype-disillusionment cycle’ is a welcome treatment of a fraught subject.” —The New Yorker¶
¶
“A sweeping, insightful look at how public education and the teaching profession have evolved and where we may be headed.” —Booklist, starred review

"[An] immersive and well-researched history. . . . Attacking a veritable hydra of issues, Goldstein does an admirable job, all while remaining optimistic about the future of this vital profession." —Publishers Weekly

"Think teachers are overpaid? Or are they dishonored and overworked? Both positions, this useful book suggests, are very old—and very tired . . . Goldstein delivers a smart, evenhanded source of counterargument." —Kirkus Reviews

“I wanted to yell ‘Yes! Yes! Thank you for finally talking sense’ on page after page. Anyone who wants to be a combatant in or commentator on the teacher wars has to read The Teacher Wars.”  —Chris Hayes, host of MSNBC’s All In with Chris Hayes and author of Twilight of the Elites: America After Meritocracy

“It’s hard to know what to make of teachers. In the news and in the movies they are sometimes vampires sucking off public goodwill and sometimes saviors of America’s children. In this totally surprising book Dana Goldstein—who has always been Slate’s sharpest writer on education—explains how teachers have always been at the center of controversy. At once poetic and practical, The Teacher Wars will make school seem like the most exciting place on earth.” —Hanna Rosin, author of The End of Men

“Dana Goldstein proves to be as skilled an education historian as she is an astute observer of the contemporary state of the teaching profession. May policy makers take heed.” —Randi Weingarten, President, American Federation of Teachers

“A colorful, immensely readable account that helps make sense of the heated debates around teaching and school reform. The Teacher Wars is the kind of smart, timely narrative that parents, educators, and policy makers have sorely needed.” —Frederick M. Hess, Director of Education Policy Studies at the American Enterprise Institute

“Dana Goldstein is one of the best education writers around. Her history of the teaching profession is that and much more: an investigation into the political forces that can help or hinder student learning.” —Emily Bazelon, author of Sticks and Stones: Defeating the Culture of Bullying and Rediscovering the Power of Character and Empathy

“Teaching has always been a political profession. We all have a dog in this fight. So I can hardly imagine anyone who could not profit from reading this erudite, elegant, and relentlessly sensible book. Listen to Dana Goldstein: ‘We must quiet the teacher wars.’ Reading The Teacher Wars would be a great way to start.” —Rick Perlstein, author of Nixonland

“If more people involved in today’s discussion about education reform read this book, our national conversation about schooling would be deeper and more effective. Buy this book. Read this book. Share it with your friends who care about education. A very important work.” —Peg Tyre, author of The Good School: How Smart Parents Get Their Kids the Education They Deserve

“Why are today's teachers pictured simultaneously as superheroes and villains? In clear, crisp language, Dana Goldstein answers that question historically by bringing to life key figures and highlighting crucial issues that shaped both teachers and teaching over the past century. Few writers about school reform frame the context in which teachers have acted in the past. Goldstein does exactly that in thoughtfully explaining why battles over teachers have occurred then and now.”  —Larry Cuban, Professor Emeritus of Education, Stanford University
or
Buy Here
Copyright © 2020 American Booksellers Association