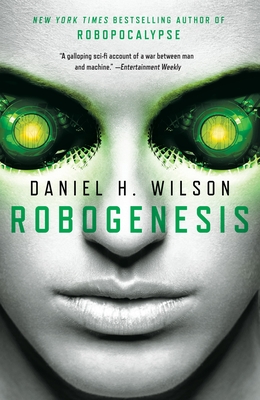 It’s been three years since the global uprising of the world's robots, three long years in which ordinary people waged a guerilla war that saved humankind from the brink of annihilation. But a horrific new enemy has emerged, and the resistance is called to fight once again. And in a world where humanity and technology are pushed to the breaking point, their one hope may reside with their former enemy—Archos R-14.

"A galloping sci-fi account of a war between man and machine.” —Entertainment Weekly

“A solid read for anyone who likes . . . survivalist stories.” —The Pittsburgh Post-Gazette

Daniel H. Wilson was born in Tulsa, Oklahoma and earned a B.S. in computer science from the University of Tulsa and a Ph.D. in robotics from Carnegie Mellon University in Pittsburgh. He is the author of Amped, Robopocalypse, How to Survive a Robot Uprising, Where's My Jetpack?, How to Build a Robot Army, The Mad Scientist Hall of Fame, and Bro-Jitsu: The Martial Art of Sibling Smackdown.
Loading...
or
Not Currently Available for Direct Purchase