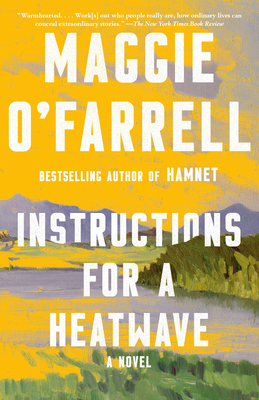 An unforgettable narrative—from the New York Times bestselling author of Hamnet—of a family falling apart and coming together with hard-won, life-changing truths about who they really are.

“Strange weather brings out strange behavior.” London, 1976. In the thick of a record-breaking heatwave, Gretta Riordan’s newly retired husband has cleaned out his bank account and vanished. Now, for the first time in years, Gretta calls her children home: Michael Francis, a history teacher whose marriage is failing; Monica, whose blighted past has driven a wedge between her and her younger sister; and Aoife, the youngest, whose new life in Manhattan is elaborately arranged to conceal a devastating secret.

In a story that stretches from the Upper West Side to a village on the coast of Ireland, Maggie O’Farrell explores the mysteries that inhere within families, and reveals the fault lines over which we build our lives.


Praise For Instructions for a Heatwave: A novel (Vintage Contemporaries)…

“Warmhearted. . . . Work[s] out who people really are, how ordinary lives can conceal extraordinary stories.” —The New York Times Book Review

“Perhaps a perfect book. . . . Proceeding at a stately and crisp speed through a fully rendered world, grappling at all times and in an original way with the fascinating problems of our time, rushing head-long—and yet staggering almost drunkenly when necessary—towards a stirring and wondrous conclusion.” —The Los Angeles Review of Books

“A thoroughly engrossing and suspenseful novel. . . . O’Farrell, in this beautifully written tale, gets the psychological nuances just right.” —Anita Shreve

“A narrative of extraordinary power. . . . Big-hearted, psychologically complex, and utterly gripping from page one.” —Maria Semple, author of Where’d You Go, Bernadette

“O’Farrell has done it again. . . . There is a deliciousness to this novel, a warmth and readability that render it unputdownable and will surely make it a hit.” —The Guardian (London)

“A rich, barbed interplay among siblings, who gibe, snap, and snipe as they go through their father’s things, slowly teasing out one another’s long-buried secrets.” —Entertainment Weekly, Grade: A-

“Unputdownable. . . . There’s always something so tender and true in Maggie O’Farrell’s writing; a lovely ability to observe the smallest, most ordinary detail of family life and gild it with grace and significance.” —Marie Claire

“Once again, O’Farrell demonstrates her mastery at depicting strained relationships, skewed family loyalties and the just reachable light at the end of the tunnel.” —Minneapolis Star Tribune

“Superlative. . . . A Mike Leigh-style extravaganza of reckonings and reconciliations.” —Vogue

“Well worth seeking out. . . .  It might sound a little grand to wax lyrical about ‘the power of the novel’ and all that, but you know, there is such a thing, and this book taps into it.” —PopMatters

“Just the kind of family drama I love. . . . Stylish, funny, smart, and skillfully written, and I could not put it down.” —Jami Attenberg, author of The Middlesteins

“An accomplished and addictive story told with real humanity, warmth and infectious love for the characters. Highly recommended.” —The Observer (London)

“O’Farrell is a deliciously insightful writer. . . . The final scenes of the family’s trip to Ireland is as perceptive on the jaggedness of family forced together as Colm Tóibín’s The Blackwater Lightship.” —The Independent on Sunday

“O’Farrell is hard to beat. Anyone looking for a British equivalent of Anne Tyler need look no further.” —The Scotsman

MAGGIE O'FARRELL was born in Northern Ireland in 1972. Her novels include Hamnet (winner of the National Book Critics Circle Award), After You’d Gone, The Vanishing Act of Esme Lennox, The Hand That First Held Mine (winner of the Costa Novel Award), and Instructions for a Heatwave. She has also written a memoir, I Am, I Am, I Am: Seventeen Brushes with Death. She lives in Edinburgh.