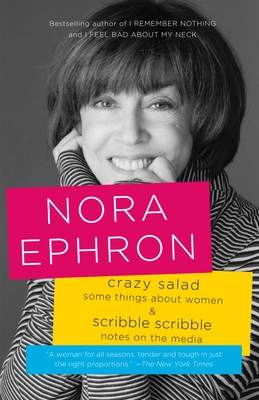 Some Things About Women and Notes on Media

Two classic collections of Nora Ephron’s uproarious essays—tackling everything from feminism to the media, from politics to beauty products, with her inimitable charm and distinctive wit—now available in one book for the first time.

This edition brings together some of Ephron’s most famous writing on a generation of women (and men) who helped shape the way we live now, and on events ranging from the Watergate scandal to the Pillsbury Bake-Off. In these sharp, hilariously entertaining, and vividly observed pieces, Ephron illuminates an era with wicked honesty and insight. From the famous “A Few Words About Breasts” to important pieces on her time working for the New York Post and Gourmet Magazine, these essays show Ephron at her very best.

Praise For Crazy Salad and Scribble Scribble: Some Things About Women and Notes on Media…

“A woman for all seasons, tender and tough in just the right proportions.” —The New York Times

“A tremendously talented woman from a significant American period. . . . tremendous talent is her forte, her strong suit, her fiendish trump card.” —The Washington Post

“Stylish, opinionated, with a kind of take-no-prisoners fearlessness rooted in both the women’s movement and the equally complex terrain of her own emotions” —Los Angeles Times

“As tart and refreshing as the first gin and tonic of summer.” —The New York Times Book Review

“Nora Ephron is, in essence, one of the original bloggers—and if everyone could write like her, what a lovely place the Internet would be. . . . telling stories that were, more often than not, ultimately about herself, and doing so with such warmth, wit and skill that they became universal.” —The Seattle Times