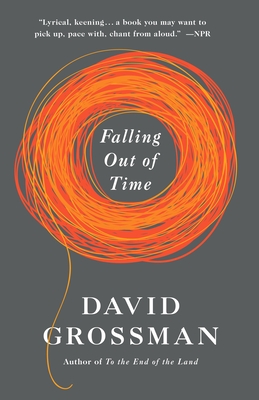 Falling Out of Time (Vintage International)

In this compassionate and genre-defying drama the internationally acclaimed author of To the End of the Land weaves an incandescent tale of parental grief.

A powerful distillation of the experience of understanding and acceptance, and of art’s triumph over death, Falling Out of Time is part play, part prose, and pure poetry. As Grossman’s characters ultimately find solace and hope through their communal acts of mourning, readers will find comfort in their clamorous vitality, and in the gift of storytelling—a realm where loss is not an absence, but a life force in its own right.


Praise For Falling Out of Time (Vintage International)…

“An almost unbearably personal work. . . . The monologues evoke both the raw declarations of Athenian tragedy and the homespun lamentations of Robert Frost’s narrative poem.” —The Wall Street Journal

“Spare and poetic.” —The New York Review of Books

“A richly emotional, mystical and philosophical tapestry . . . [Falling Out of Time] deserves recognition among the greatest works in the brave and indispensable tradition of art that pushes back against catastrophe.” —Jewish Daily Forward

“Slim in dimension but as solid as sculpted rock. . . . Although it grows from a private, incomparable ordeal, this noble fable speaks for all.” —The Independent (London)

“[Grossman is] the greatest Israeli writer of his generation. . . . Talmudic, polyphonic, yearning, [Falling Out of Time] comes from a place of pain and darkness and is acutely moving.” —The Daily Telegraph (London)

“The language of its composition makes it particular to Israel, but once translated [Falling Out of Time] becomes universal.” —The Times Literary Supplement (London)

“Grossman is perhaps Israel’s most important contemporary novelist. . . . [Falling Out of Time] resembles a play by Beckett or a Greek tragedy. . . . A haunting, affecting and even beautiful book.” —The Toronto Star

“It’s not a novel, but a mixture of poetry, prose and drama . . . as true and as powerful as CS Lewis’s great A Grief Observed.” —The Times (London)

“At once more universal and more personal than anything [Grossman] has written before.” —Sunday Times (London)

“Falling Out of Time is short, and clearly a deeply personal book, but its importance and impact ought not to be underestimated.” —The Guardian (London)

“Sensual and uncompromising. . . . Written with such simplicity it appears to be speaking directly to the reader, Falling Out Of Time is at times Biblical in its imagery, at others weird and fantastical. . . . It’s a measure of Grossman’s clarity of thought and his theatrical timing that one reaches its end and feels, in some small way, glad to have been in his characters’ company however grim the road they travel.” —The Herald Scotland

“An impassioned exploration of existential questions about life and death. . . . The precision and sensory depth of Grossman’s language renders this unconventional work an unforgettable and magnificent document of suffering.” —Publishers Weekly (starred review)

David Grossman was born in Jerusalem. He is the author of numerous works of fiction, nonfiction, and children's literature. His work has appeared in The New Yorker and has been translated into more than forty languages. He is the recipient of many prizes, including the French Chevalier de l'Ordre des Arts et des Lettres, the Buxtehuder Bulle in Germany, Rome's Premio per la Pace e l'Azione Umanitaria, the Premio Ischia—international award for journalism, Israel's Emet Prize, and the Albatross Prize given by the Günter Grass Foundation.
Loading...
or support indie stores by buying on