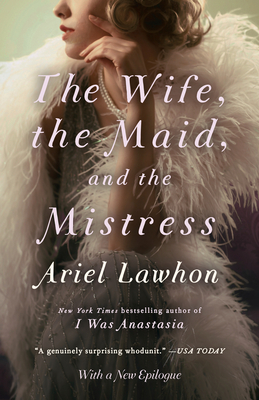 From the New York Times bestselling author of I Was Anastasia comes a novel that tantalizingly reimagines a scandalous murder mystery that rocked the nation.

One summer night in 1930, Judge Joseph Crater steps into a New York City cab and is never heard from again. Behind this great man are three women, each with her own tale to tell: Stella, his fashionable wife, the picture of propriety; Maria, their steadfast maid, indebted to the judge; and Ritzi, his showgirl mistress, willing to seize any chance to break out of the chorus line.

As the twisted truth emerges, Ariel Lawhon’s wickedly entertaining debut mystery transports us into the smoky jazz clubs, the seedy backstage dressing rooms, and the shadowy streets beneath the Art Deco skyline.

“Fresh and imaginative. . . . A sordid portrait of mobsters and mayhem, corruption and carnage, greed and graft . . . [Lawhon] slyly builds the suspense to a stunning revelation.” —Richmond Times-Dispatch

“Ariel Lawhon has concocted a stylish homage to noir in The Wife, The Maid, and The Mistress. This fun, fast-paced novel has it all: speakeasies, gangsters, show girls, and not one, not two, but three women scorned. A real page-turner.” —Melanie Benjamin, bestselling author of The Aviator's Wife

“This book is more meticulously choreographed than a chorus line. It all pays off. Clues accumulate. Each scene proves important. Everyone lies. Once the rabbit is out of the hat, everything takes on a different texture, reorganizes and makes sense. A second reading, like a second cocktail, is almost better than the first.” —Chelsea Cain, The New York Times Book Review

“A romp through New York in the late ’20’s. . . . Populated by gangsters and crooked politicians, society ladies and dancers, this story is nothing like your day-to-day life and yet . . . you will find the three women mentioned in the title strangely recognizable.” —Charlotte Observer

“A page-turner filled with glitz and glamour as well as murder, greed, and deceit.” —Romantic Times

“The twists and turns in the tale of lust, greed, and deceit keep you guessing until the final pages. . . .The Nancy Drew in you can’t wait to solve the artfully hidden clues in this historical mystery.” —Daily Candy

“A great story, told with verve and feeling. . . . Lawhon walks one of fiction’s trickiest tightropes, creating a novel that is both genuinely moving and full of pulpy fun.” —Booklist

“Vivid and unsettling, with a finale as startling as the pop of a gun.” —Caroline Leavitt, bestselling author of Pictures of You and Is This Tomorrow

Ariel Lawhon is co-founder of the popular website She Reads.org. A novelist, blogger, and lifelong reader, she lives in the rolling hills outside Nashville, Tennessee with her husband, four sons, and black lab—who is, thankfully, a girl.
Loading...
or support indie stores by buying on
(This book is on backorder)