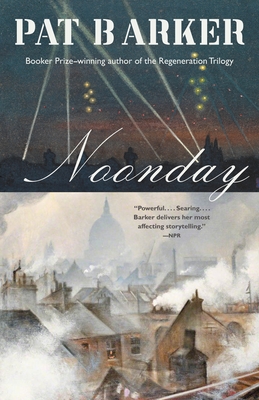 London, 1940. As bombs fall onto the blacked-out city, ambulance driver Elinor Brooke, working alongside former friend Kit Neville, races from bomb sites to hospitals, while her husband Paul Tarrant works as an air raid warden. Once fellow students at the Slade School of Fine Art before the First World War, the three now find themselves caught in another war—this time at home.

As the bombing intensifies, into their midst comes the spirit medium Bertha Mason, grotesque and unforgettable, whose ability to make contact with the deceased finds vastly increased demands as death rains down from the skies. Old loves and obsessions resurface until Elinor is brought face to face with an almost impossible choice. Concluding the story begun in Life Class and continued in Toby’s Room, Noonday is both a gripping standalone novel and the culmination of an extraordinary trilogy.

“Gripping. . . . Compelling. . . . Barker is at the height of her historicist powers.” —Los Angeles Review of Books

“Powerful and compassionate. . . . A fine and satisfying novel.” —Financial Times

“[A] sweeping panorama.” —The New Yorker

“Searing. . . . [Barker] grounds Noonday with historical fact and offers telling physical detail. . . . Glimmering moments like these make fans look forward to what Barker will write next.” —The Miami Herald

“Compelling. . . . Weaves narrative and reportage so skillfully, you don't realize how much empathy you're suffering; you're too busy being involved in what's happening. . . . Another fine work by a great writer.” —Pittsburgh Post-Gazette

“Vivid. . . . Evocative. . . . Noonday does a magnificent job of bringing to life the rain of death London experienced in 1940.” —Minneapolis Star Tribune

“A novel of sure-footed storytelling. . . .  The mindless destruction of the capital is simultaneously apocalyptic and beautiful, inhibiting and rich with opportunity. Ideas, emotions and attitudes prove as fragile—and as flammable—as the physical landscape.” —The New Statesman

“Intelligent, uncompromising. . . . Searingly re-creates a wartime landscape. . . . Barker is as subtle and tough-minded here about human nature as in all her work. Yet the closing pages suggest the possibility of new beginnings even as they acknowledge the permanence of old wounds.” —Kirkus Reviews (starred)

Pat Barker is most recently the author of the novels Toby's Room and Life Class, as well as the highly acclaimed Regeneration Trilogy: Regeneration; The Eye in the Door, winner of the Guardian Fiction Prize; and The Ghost Road, winner of the Booker Prize; as well as seven other novels. She lives in the north of England.
Loading...
or
Not Currently Available for Direct Purchase