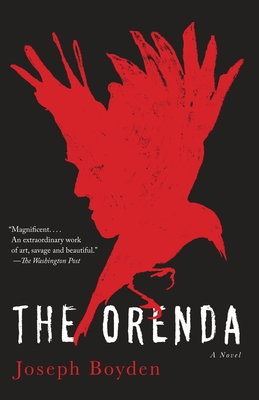 “Wrenching and redemptive, The Orenda offers a narrative scope so wide it seems to encompass centuries and generations, despite taking place over only a few short years. Though Boyden's novel closely follows a strange trinity of the displaced and the mournful -- a powerful Wendat warrior scarred by the loss of his family, an ungainly but earnest Jesuit missionary, and the troubled, gifted Iroquois girl who equally unites and stands apart from them -- he writes of timeless and universal cycles of loss and regeneration and loss again. This is a staggeringly beautiful work.”
— Sam Kaas, Village Books, Bellingham, WA
View the List

WINNER OF THE LIBRIS AWARD — FICTION BOOK OF THE YEAR

In the wilds of seventeenth-century North America, the lives of a Jesuit missionary, a young Iroquois girl, and a great warrior and elder statesman of the Huron Nation become entwined.

The Huron have battled the Iroquois for generations, but now both tribes face a new, more dangerous threat from another land. Uneasy alliances are made and unmade, cultures and beliefs clash in the face of precipitous change, and not everyone will survive the march of history. Joseph Boyden’s magisterial novel tells this story of blood and hope, suspicion and trust, hatred and love: a saga nearly four hundred years old—and now a timeless work of literature.

Praise For The Orenda…

“An extraordinary work that sets the traditional cowboy and Indian story on its head. One of those rare books that manages to be both a work of art and a page-turner, The Orenda is destined to be a classic.”
—Philipp Meyer, New York Times bestselling author of The Son

“Magnificent. . . . An extraordinary work of art, savage and beautiful.” —The Washington Post

“A rare reading experience that stayed with me even when away from the book and long after I finished reading it. . . . Boyden’s prose has a gorgeous simplicity in service of this transcendent tale.” —David Takami, The Seattle Times

“The genuine article: a truly necessary book. The Orenda sheds new light on the dark crime at the heart of all North American history, but more important than that, it renders the ostensible victims of that crime, the Indians, as complex, fully realized human beings.” —The Millions

“Thoroughly beautiful, brilliantly imagined. . . . A few paragraphs into The Orenda I was so thoroughly absorbed in Joseph Boyden’s re-creation of the moment of first contact between Old World and New that I was digging my nails into my palms.” —Jay McInerney

“Satisfies both the heart and the intellect. . . . Highly cinematic. . . . [The Orenda] recall[s] Chinua Achebe’s Things Fall Apart, another novel about European missionaries disrupting the fabric of a traditional society.” —The Rumpus

“Boyden is such a fine writer, evoking his characters’ emotions in a touching and understandable way. . . . [His] portrait of the Huron is textured with fascinating details.” —The Toronto Star

“Epic. . . . Even-handed and morally complex, melodramatic and keenly felt, it is historical fiction at its best.” —The Daily Telegraph (London)

“A heart song that spans the continent, and echoes to us across the years. At times devastating and difficult, Joseph Boyden’s novel is equally compassionate and inspiring.” —Robert F. Kennedy, Jr.

“Profoundly researched and told in elegant, muscular prose. . . . A great, heartbreaking novel, full of fierce action and superb characters and an unblinking humanity.” —The Globe and Mail (Toronto)

“[A] stunning historical epic. . . . The Orenda is much more than a timely novel. It is a timeless one; born a classic. . . . Powerful and convincing.” —National Post (Canada)

“A sublime, haunting, and harrowing achievement—a work of fiction, of art, of myth-making at its very finest.” —Dinaw Mengestu, author of All Our Names and The Beautiful Things That Heaven Bears

“A stunning, masterful work of staggering depth. . . it is like nothing you have ever read, and read it you must. . . . The Orenda is a feat, an achievement [that] is impossible to read without coming away profoundly shaken, possibly changed.” —The Vancouver Sun

“As gripping as anything I have ever read. . . . Years from now, The Orenda will be called a classic, but for now Joseph Boyden will have to settle for visionary, majestic, awe-inspiring.” —Benjamin Percy, author of Red Moon, The Wilding, and Refresh, Refresh

Joseph Boyden’s first novel, Three Day Road, won numerous awards including the Rogers Writers’ Trust Fiction Prize and the McNally Robinson Aboriginal Book of the Year. His second novel, Through Black Spruce, was awarded the Scotiabank Giller Prize and named the Canadian Booksellers Association Book of the Year; it also earned him the CBA’s Author of the Year Award. The Orenda was a finalist for the Governor General’s English Language Prize and the Scotiabank Giller Award, and won the Libris Book of the Year Award. In 2012, Boyden received the Queen Elizabeth II Diamond Jubilee Medal for his contributions to Canadian art and culture. Boyden is a member of the creative writing faculty at the University of British Columbia in Vancouver, Canada, and at the Institute of American Indian Arts in Santa Fe, New Mexico. He divides his time between Northern Ontario and Louisiana.
Loading...
or support indie stores by buying on
(This book is on backorder)