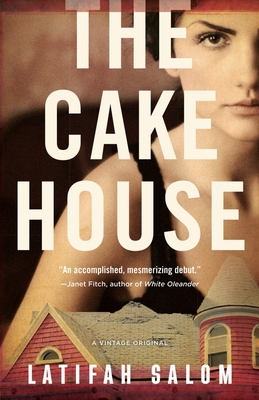 Rosaura Douglas's father shot himself after her mother left him . . . or at least that's the story everyone is telling. Now her mother has remarried and Rosie is trapped in "The Cake House," a garish pink edifice in the hills of Los Angeles that's a far cry from the cramped apartment where she grew up. It's also the house where her father died—a fact that everyone else who lives there, including her mother, Dahlia, and her mysteriously wealthy stepfather, Claude, want to forget.

Soon, however, her father's ghost appears, sometimes in a dark window, sometimes in the house’s lush garden, but always with warnings that Claude is not to be trusted. And as the ghost becomes increasingly violent—and the secrets of her family’s past come to light—Rosie must finally face the truth behind the losses and lies that have torn her life apart.

Praise For The Cake House…

"Intense and savagely beautiful, Latifah Salom’s The Cake House grabs you, then grabs you harder.  The magic of this suburban-gothic literary thriller is the scale on which it’s done—small and absolutely terrifying. An accomplished, mesmerizing debut."  —Janet Fitch, author of White Oleander

“The Cake House is a gem of a novel: a mystery wrapped in a cloak of family dysfunction with subtle Shakespearean trim. . . . Rosaura is a heroine with spunk and a vulnerability so endearing I missed her the second I closed the book. Salom has written a dazzling coming-of-age tale that will resonate long after you reach the end.” —Elizabeth Flock, New York Times bestselling author of Me & Emma and What Happened To My Sister

"Readers will welcome Salom’s debut for her nimble prose, as she constructs an otherworldly Southern California setting. . . . From the explosive first pages, when 14-year-old Rosaura’s father is shot dead in the entrance of the grand but sterile “cake house” of the title, we know that pieces of this mystery will remain teasingly hazy. . . . A worthwhile page-turner." —Booklist

“Tense,  shocking, and seductively dark, The Cake House is a brand-new twist on a classic story—an urban reinvention of a Shakespearean tale.” —Rebecca Coleman, bestselling author of The Kingdom of Childhood

“Reading The Cake House, I vividly saw the whole edifice rising up before me, latticework covering a multitude of sins. A wonderful, chewy, complicated book that doesn't flinch from danger or pain but rejects despair.” —Naomi Novik, author of the bestselling Temeraire series

Latifah Salom was born in Hollywood, California to parents of Peruvian and Mexican descent. As a teenager she attended the Los Angeles County High School for the Arts, and she holds degrees from Emerson College, Hunter College, and from the University of Southern California’s Masters of Professional Writing program. She currently lives in Los Angeles.
Loading...
or
Not Currently Available for Direct Purchase