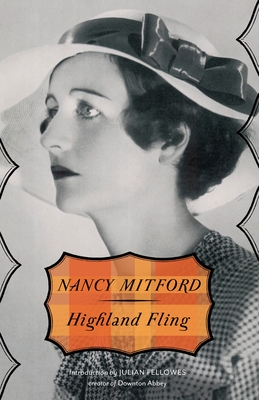 In Highland Fling—Nancy Mitford’s first novel, published in 1931—a set of completely incompatible and hilariously eccentric characters collide in a Scottish castle, where bright young things play pranks on their stodgy elders until the frothy plot climaxes in ghost sightings and a dramatic fire.

Inspired in part by Mitford’s youthful infatuation with a Scottish aristocrat, her story follows young Jane Dacre to a shooting party at Dulloch Castle, where she tramps around a damp and chilly moor on a hunting expedition with formidable Lady Prague, xenophobic General Murgatroyd, one-eyed Admiral Wenceslaus, and an assortment of other ancient and gouty peers of the realm, while falling in love with Albert, a surrealist painter with a mischievous sense of humor. Lighthearted and sparkling with witty banter, Highland Fling was Mitford’s first foray into the delightful fictional world for which the author of The Pursuit of Love and Love in a Cold Climate later became so celebrated.

With an Introduction by Julian Fellowes, creator of Downton Abbey.

“Highland Fling is a taster of coming delights. . . . It is the first time Mitford attempted to quantify and codify and explain the world of her beginnings, always seen with her wonderful, comic vision. . . . There is cruelty beneath the comedy, a kind of sharpness that bears testimony to the force of her judgment even when it is wrapped in the cotton wool of humour. But most of all, there is truth.” —from the Introduction by Julian Fellowes, creator of Downton Abbey

Nancy Mitford, daughter of Lord and Lady Redesdale and the eldest of the six legendary Mitford sisters, was born in 1904 and educated at home on the family estate in Oxfordshire. She made her debut in London and soon became one of the bright young things of the 1920s, a close friend of Henry Green, Evelyn Waugh, John Betjeman, and their circle. A beauty and a wit, she began writing for magazines and writing novels while she was still in her twenties. In all, she wrote eight novels as well as biographies of Madame de Pompadour, Voltaire, Louis XIV, and Frederick the Great. She died in 1973. More information can be found at www.nancymitford.com.
Loading...
or support indie stores by buying on
(This book is on backorder)