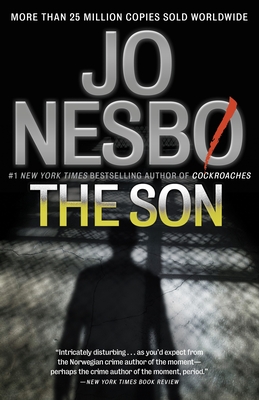 The author of the best-selling Harry Hole series now gives us an electrifying tale of vengeance set amid Oslo's brutal hierarchy of corruption.

Sonny Lofthus has been in prison for almost half his life: serving time for crimes he didn't commit. In exchange, he gets an uninterrupted supply of heroin—and a stream of fellow prisoners seeking out his Buddha-like absolution. Years earlier Sonny’s father, a corrupt cop, took his own life rather than face exposure. Now Sonny is the center of a vortex of corruption: prison staff, police, lawyers, a desperate priest—all of them focused on keeping him stoned and jailed. When Sonny discovers a shocking truth about his father’s suicide, he makes a brilliant escape and begins hunting down the people responsible for his and his father’s demise. But he's also being hunted, and by enemies too many to count. Two questions remain: who will get to him first, and what will he do when he’s cornered?


Praise For The Son…

“An elegant stand-alone novel full of vengeance and redemption.”
—The Florida Times Union

“The standard bearer for the phenomenon that is Scandinavian crime fiction. . . . Fast-paced and imaginatively violent, this latest example of Nesbo’s Nordic noir hurtles like an express train towards a last act of almost operatic extravagance that leaves dead bodies and carefully nurtured reputations littering the stage. Great stuff altogether.”
—Independent (Ireland)

“[Nesbø is] one of the current leading lights in Scandinavian crime fiction . . . Ridiculously talented . . . with his clear gift for hairpin twists and turns. . . . The thriller is so tightly plotted that it will keep readers steadfastly glued to their seat. . . . What Nesbø has crafted is not a whodunit in the traditional sense, as the writer is interested in the far more fascinating question of what can drive a person to evil?”
—Daily Style (Australia)

“Nesbø’s new book makes all the hype before publication seem like false modesty, and is quite simply a fantastic piece of crime literature. . . . First and foremost, this is a clever, enthralling and driven story that is impossible to put down.”
—Dagens Næringsliv (Norway)

“Yet another powerful demonstration of Nesbø’s talent for creating a story that plays on all nerve strands and with so much intensity that it embodies both the Bible and Batman at once. It is really well done. It is still early in the year, but I wouldn't be surprised if someone should dub The Son as the crime novel of the year.”
—Ekstra Bladet (Denmark)

“The pace proves to be on top in the new book, in a positive sense. This remains Norwegian crime literature in a class by itself. A plot that stretches and spreads out like great mathematical formulas, with many unfamiliar characters in the equation, but without being arcane or excessive in his fantastic interpretations. . . . Jo Nesbø prevails once again.”
—Dagsavisen (Norway)

“The Son is a modern take on the story about Christ, that tackles the corruption in Oslo. . . . Jo Nesbø’s writing is incredible as usual.”
—Jyllands-Posten (Denmark)

“Tremendously well written by Nesbø. . . . There is something unstoppably vital about Jo Nesbø as a designer of crime stories in the baroque style. His pen is on fire and although it may be noted that it goes too fast sometimes linguistically, the stories he creates has so many staggering twists and turns that it is almost physically impossible not to get hooked.”
—Aftenposten (Norway)

“Crime novels are rarely so skillfully told and at the same time so much more than pure entertainment. But Nesbø is a master.”
—Berlingske (Denmark)

“No Norwegian crime writer can create such complex crime plots without losing in detail like Nesbø can. You might say that Nesbø is both high and low in his texts, and that is one of the main reasons why his novels rise above most others in this genre.”
—Dagbladet (Norway)

“It is a formidable, diabolically clever and devilishly good book that is well put together, down to the smallest detail.”
—Nordjyske Stiftstidene (Denmark)

“The story . . . is propelled with great force and an unerring sense of detail. . . . It is simply thrilling to read.”
—NRK (Norway)

“No one at our latitudes knows the game like Nesbø does. No one is even close to his craftsmanship in writing crime novels that hold such international standard.”
—Adresseavisen (Norway)”

“A high level of suspense all the way and limitless brutality. The bad guys get what they deserves and Nesbø’s writing is almost more cynical and concrete than usual. There are also a few love stories along the way, that—almost—end happily.”
—Lolland-Falsters Folketidende (Denmark)

JO NESBØ is a musician, songwriter, economist, and author. His first crime novel featuring Harry Hole was published in Norway in 1997 and was an instant hit, winning the Glass Key Award for best Nordic crime novel. He is the author of ten Harry Hole novels, Headhunters, The Son, and several children’s books. His books have been translated in forty-seven languages. In 2008, he established the Harry Hole Foundation, a charity to reduce illiteracy among children in the third world. He lives in Oslo.

www.jonesbo.com
or
Not Currently Available for Direct Purchase