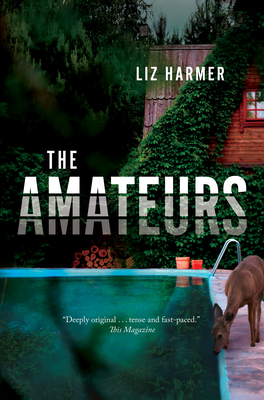 In the style of Margaret Atwood's The Year of the Flood, Dave Eggers' The Circle: a post-apocalyptic examination of nostalgia, loss and the possibility of starting over.

Allow us to introduce you to the newest product from PINA, the world's largest tech company. "Port" is a curiously irresistible device that offers the impossible: space-time travel mysteriously powered by nostalgia and longing. Step inside a Port and find yourself transported to wherever and whenever your heart desires: a bygone youth, a dreamed-of future, the fabled past.

In the near-future world of Liz Harmer's extraordinary novel, Port becomes a phenomenon, but soon it is clear that many who pass through its portal won't be coming back--either unwilling to return or, more ominously, unable to do so. After a few short years, the population plummets. The grid goes down. Among those who remain is Marie, a thirtysomething artist living in a small community of Port-resistors camping out in the abandoned mansions of a former steel town. As winter approaches the group considers heading south, but Marie clings to the hope that her long lost lover will one day return to the spot where he disappeared.

Meanwhile, PINA's corporate campus in California has become a cultish enclave of survivors. Brandon, the right-hand man to the mad genius who invented Port, decides to get out. He steals a car and drives north-east, where he hopes to find his missing mother. And there he meets Marie.

The Amateurs is a story of rapture and romance, and an astoundingly powerful tale about what happens when technology meets desire.

LIZ HARMER's stories and essays have been published in The Malahat Review, PRISM, Grain, The New Quarterly, Little Brother and other journals. She has won a National Magazine Award in Personal Journalism, was longlisted for the CBC Short Story Prize and was a finalist for a Glimmer Train Prize. She holds an MA in Creative Writing from the University of Toronto, where her mentor was Charles Foran. She has also studied with David Bezmozgis, Richard Greene, Robert McGill and Richard Bausch. Raised in Hamilton, Ontario, she now lives with her husband and their three young daughters in southern California, where she is hard at work on a second novel.

Praise For The Amateurs…

“Like all good science fiction, The Amateurs ably carries the weight of analogy: the grand themes of technology and what we’ve done to our planet and ourselves.” —Toronto Star

“Harmer creates a solid balance of a lived-in setting and a high concept. . . . Harmer’s description of the effects of the changed world, and how these characters perceive it, resonates deeply. . . . A discovery at the end of the first part leads thematically into the second’s shift in focus, allowing for two distinct riffs on the idea of coping with the end of everything. It’s a metaphorically rich concept, and Harmer keeps a solid balance between the ambiguity and the world-building. . . . This novel weds a high concept to an abundance of heart; like the mysterious passages in it, it’s hard to shake.” —TOR.com

“In her near perfect debut novel, Liz Harmer taps into current anxieties about technology to explore themes of transcendence, post-urbanity, and survival. . . . Harmer’s prose and pacing are elegant and precise, her characters distinct and engaging. . . . The novel’s dystopian setting is fully realized . . . nearly every conceivable question about the post-port world is addressed with grace and subtlety. . . . [The Amaterus] captivates right up to its final page.” —Quill & Quire

“[A] stunningly powerful work of post-apocalyptic fiction that examines our sense of reality and deals with the ultimate questions of where we came from and where we’re headed.” —The Hamilton Spectator

“Deeply original, The Amateurs is tense and fast-paced, exploring what happens when technology and desire meet in a world that doesn’t seem so different from ours.” —This Magazine

“The Amateurs is sly and smart, unsettled and unsettling, a bold probe into our age’s grand seduction. An astonishing debut by a dazzling new voice.” —Charles Foran
or support indie stores by buying on
Copyright © 2020 American Booksellers Association