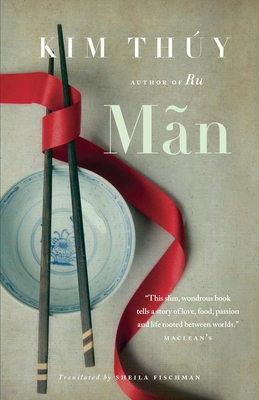 A triumph of poetic beauty and a moving meditation on how love and food are inextricably entwined, Mãn is a seductive and luminous work of literature from Kim Thúy, whose first book, Ru, was shortlisted for the Scotiabank Giller Prize, received a Governor General's Literary Award and won the nationwide book competition Canada Reads.

Mãn has three mothers: the one who gives birth to her in wartime, the nun who plucks her from a vegetable garden, and her beloved Maman, who becomes a spy to survive. Seeking security for her grown daughter, Maman finds Mãn a husband--a lonely Vietnamese restaurateur who lives in Montreal. Thrown into a new world, Mãn discovers her natural talent as a chef. Gracefully she practices her art, with food as her medium. She creates dishes that are much more than sustenance for the body: they evoke memory and emotion, time and place, and even bring her customers to tears. Mãn is a mystery--her name means "perfect fulfillment," yet she and her husband seem to drift along, respectfully and dutifully. But when she encounters a married chef in Paris, everything changes in the instant of a fleeting touch, and Mãn discovers the all-encompassing obsession and ever-present dangers of a love affair. Full of indelible images of beauty, delicacy and quiet power, Mãn is a novel that begs to be savoured for its language, its sensuousness and its love of life.

Praise for Mãn:
"This slim, wondrous book tells a story of love, food, passion and life rooted between worlds." Maclean's
"A delicate and vital love story.... The writing is both heartbreaking and insistent." Toronto Star
"A story that is ageless and universal, and exquisitely told." Winnipeg Free Press

Born in Saigon in 1968, KIM THÚY left Vietnam with the boat people at the age of ten and settled with her family in Quebec. A graduate in translation and law, she has worked as a seamstress, interpreter, lawyer, restaurant owner, and commentator on radio and television. She lives in Montreal and devotes herself to writing.

Kim Thúy has received many awards, including the Governor General’s Literary Award in 2010, and was one of the top 4 finalists of the Alternative Nobel Prize in 2018. Her books have sold more than 850,000 copies around the world and have been translated into 29 languages and distributed across 40 countries and territories.

SHEILA FISCHMAN is the award-winning translator of some 200 contemporary novels from Quebec. In 2008 she was awarded the Molson Prize in the Arts. She is a Member of the Order of Canada and a chevalier of the Ordre national du Québec. She lives in Montreal.