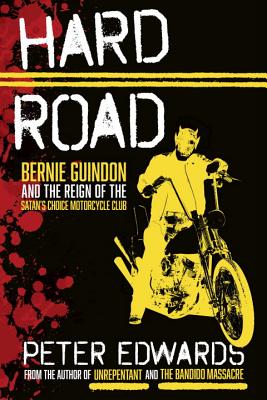 Bernie Guindon and the Reign of the Satan's Choice Motorcycle Club

The spiritual godfather of Canadian bikers tells the story of his fascinating life.

You could call Bernie Guindon the Sonny Barger of Canadian bikers (but not to his face). The founder of Satan's Choice, Guindon led what was in the 1960s the second-largest biker club in the world (after the Hells Angels, which Bernie would join briefly in the early 2000s) to national prominence and international infamy. His life wasn't all bikes and crime. He was also a medalist in boxing for Canada at the Pan Am Games. That tension between the very rough life he was born into and the possibility for success in the straight world (and how aspirations in each fed his success in the other) layer Guindon's story, one of the great untold stories in biker history. Friends from the biker world and Guindon's family have given extensive interviews for Hard Road, including his son, Harley, a convict and outlaw biker himself.

Praise For Hard Road: Bernie Guindon and the Reign of the Satan's Choice Motorcycle Club…

“Hard Road pulses with action and takes you deep inside the realm of outlaw biker gangs. Peter Edwards is a master guide with an eye for detail and the breadth of knowledge to explain the underworld like no one else.” —Joe Friesen, bestselling author of The Ballad of Danny Wolfe

“Hard Road is a full throttle ride in the fast lane. Peter Edwards accurately chronicles the history of outlaw motorcycle clubs in Canada.” —Ed Winterhalder, former Bandido and author of Out in Bad Standings


PRAISE FOR BUSINESS OR BLOOD:

“The Rizzuto family story . . . seems like the perfect plot for another The Godfather film.” —Justine Lewkowicz, NewsTalk1010.com

“Edwards and Nicaso do a fine job of connecting the dots of criminal enterprises spanning several decades in numerous countries and including various ethno-cultural groups. . . . The authors have done exhaustive research to provide readers with the necessary background regarding organized crime in Quebec, eastern Ontario, Italy and the U.S. Their research includes information that could only be gleaned from those close to the action. . . . In Business or Blood, fans of the true-crime genre have a comprehensive telling of a recent, bloody chapter of Canadian organized-crime history. It explores the reasons mass bloodlettings take place and the repercussions for organized crime and society.” —Winnipeg Free Press

“You may be astonished at how much money, power and influence the real-life Rizzuto family of Montreal amassed and how it all came so violently tumbling down.” —CBC (copy for an episode of The Current)

“Could possibly be one of the best reads of the 2015 mafia books . . . offers a seldom seen look into the Montreal mafia and the Rizzuto crime family.” —About The Mafia

“Peter Edwards knows how real bad guys eat, sleep and breathe, and on the page brings them to life—even the dead ones—better than any other true crime writer.” —Linwood Barclay, international bestselling author

“Peter Edwards is one of the best crime writers in Canada.” —Michel Auger, author of The Biker Who Shot Me: Reflections of a Crime Reporter

PETER EDWARDS has written for the Toronto Star for nearly 30 years, specializing in organized crime and justice issues. He is the author of 12 previous non-fiction books, including The Bandido Massacre: A True Story of Bikers, Brotherhood and Betrayal; One Dead Indian: The Premier, the Police and the Ipperwash Crisis; Business or Blood: Mafia Boss Vito Rizzuto's Last War (with Antonio Nicaso); and Unrepentant: The Strange and (Sometimes) Terrible Life of Lorne Campbell, Satan's Choice and Hells Angels Biker. Edwards has been awarded an eagle feather from the Union of Ontario Indians and a gold medal from the Centre for Human Rights. The author lives in Ontario, Canada.
Loading...
or
Not Currently Available for Direct Purchase