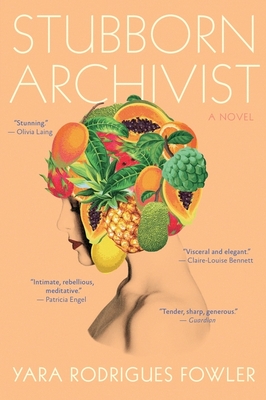 “I read Stubborn Archivist in a ravenous gulp. It’s stunning: so articulate about what it means to live between two languages and countries, tenderly unraveling the knots of unbelonging.”


—Olivia Laing, author of The Lonely City and Crudo

For fans of Chemistry and Normal People: A mesmerizing and witty debut novel about a young woman growing up between two disparate cultures, and the singular identity she finds along the way

But where are you really from?

In Stubborn Archivist, a young British Brazilian woman from South London navigates growing up between two cultures and into a fuller understanding of her body, relying on signposts such as history, family conversation, and the eyes of the women who have shaped her—her mother, grandmother, and aunt. Our stubborn archivist takes us through first love and loss, losing and finding home, trauma and healing, and various awakenings of sexuality and identity. Shot through the novel are the narrator's trips to Brazil, sometimes alone, often with family, where she accesses a different side of herself—one, she begins to realize, that is as much of who she is as anything else.

A hypnotic and bold debut, Stubborn Archivist is as singular as its narrator; a novel you won't soon forget.

Shortlisted for the Sunday Times Young Writer of the Year Award  Longlisted for the Dylan Thomas Prize  Longlisted for the Desmond Elliott Prize  One of "8 Latinx Book Recommendations From the Founders of The Latinx Read-A-Thon" (O, the Oprah Magazine)   "It has become something of a book booster’s cliché (and fib) to say they read a work 'in one gulp.' Yet twenty-something Brazilian-British author Yara Rodrigues Fowler’s transfixing Stubborn Archivist was engineered to go down faster than a 400-page novel has any right to. Mixing traditional prose with poems and flash fiction, her words whiz by like text message chains...It’s a unique work with a dedication to match: 'For Myself.'" —Vanity Fair, Great Summer Reads   “I read Stubborn Archivist in a ravenous gulp. It’s stunning: so articulate about what it means to live between two languages and countries, tenderly unravelling the knots of unbelonging.” —Olivia Laing, author of TheLonely City and Crudo   "Stubborn Archivist is an intimate and wonderfully resourceful exploration of origins. In its quest to uncover what a person is made of it digs deeply into the living body, as well as tracing back through its tangled roots. Visceral and elegant, circumspect and vivid, Yara Rodrigues Fowler has a distinctly unhampered way of telling a story; I liked Stubborn Archivist very, very much."  —Claire-Louise Bennett, author of Pond   “Intimate, rebellious, and meditative, Yara Rodrigues Fowler's exquisite deconstruction of a transnational life already in fragments will leave you spinning. Stubborn Archivist is wholly original and heralds the arrival of a remarkable new talent.” —Patricia Engel, author of The Veins of the Ocean and others   “Yara Rodrigues Fowler’s debut is unlike any other book you’ve read. A blend of prose and poetry, it’s a collection of short pieces that gradually cohere into a larger narrative…Holding the disparate elements together is a strong sense of identity and voice…Flitting nimbly through generations, between Brazil and south London, between dating and dictatorship, this is a novel that is personal and political – and its unusual form is integral to its power.” —Observer (UK), “Meet the hottest-tipped debut novelists of 2019”   "This novel beautifully explores the notion of home, belonging and trauma for people who, like this Brazilian-English writer, find themselves growing up between languages and cultures and identities. Written through collected bits and conversations the protagonist archives, this is a unique book you’ll be able to read in one immersive sitting." —Elle (UK), "Ones To Watch: The New Writers We’re Excited To Read In 2019​"   "A young Brazilian-British woman finds her footing between cultures in Rodrigues Fowler’s formally ambitious, captivating debut...Moving back and forth through time, alternating short prose sections with poems and pauses, and at times switching to Portuguese as the narrator 'finds the other words,' Rodrigues Fowler writes frankly and imaginatively of the felicities and difficulties of adolescence and family ties, and of learning 'to wrap your life around another person’s life.' This is a powerful debut." —Publishers Weekly, "Books of the Week"   "In this artful debut, snatches of dialog —

YARA RODRIGUES FOWLER was born in 1992. She grew up in a British Brazilian household in Balham, South London, where she is still based. She has an BA from Oxford University and an MA from University College London, and is a trustee of Latin American Women’s Aid. Stubborn Archivist is her first book.
Loading...
or support indie stores by buying on