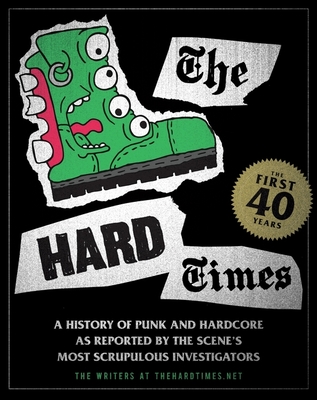 From the comedic minds behind TheHardTimes.net comes the most accurate reporting on punk and hardcore culture in music history

ONE OF PITCHFORK'S BEST MUSIC BOOKS OF 2019

Since 2014, The Hard Times has been at the forefront of music journalism, delivering hard-hitting reports and in-depth investigations into the punk and hardcore scene. From their scathing takedown of Kim Jong-un after he appointed himself the new singer of Black Flag to their incisive coverage of a healthy Lars Ulrich being replaced by a hologram, the site has become a trusted source for all things counterculture.

Now, in this zine-style “historical retrospective,” the writers behind the site reveal their humble roots, documenting The Hard Times’ ascension alongside the rise of punk. With original articles from their ‘archives’ commenting on ’70s, ’80s, and ’90s punk, as well as fan favorites from the aughts onward, this comprehensive examination of the scene will make readers dust off their Doc Martens and creepy crawl their way to the nearest pit.

Praise For The Hard Times: The First 40 Years…

PRAISE FOR THE HARD TIMES: THE FIRST FORTY YEARS:

“250 pages of non-stop LOLs…[with] spot-on pieces satirizing the punk, hardcore, and indie worlds with a consistency that rivals The Onion in its prime.” –Pitchfork, Best Music Books of 2019

“Painstakingly researched…a testament to the benefits of strategically selling out.” –Washington Post

“Hilarious…The First 40 Years bundle acidic jokes and incisive industry commentary in articles that celebrate and eviscerate the scene as it’s evolved from the Buzzcocks to Blink-182.” –AV Club

“Think of it like The Onion for the cool kids.” –NPR’s Morning Edition

“The Hard Times offers comfort amid today’s endless news cycle of shootings, corruption, and environmental catastrophes…Sometimes we need humor to heal, and this book has as much of the former as you could possibly hope for.” –San Francisco Weekly

100% AUTHENTIC PRAISE FOR THE HARD TIMES:

“Is this that meme page from Instagram?” —Dave Grohl, lead vocalist, Foo Fighters

“Ronald Reagan and his band of merry billionaires set the stage for a corrupt world that puts profits over people. Oh, how they promised the citizens of this country that trickle-down economics would be a boon to the working class, when the only trickle we got was in the form of piss being rained down on us from the . . . [cut for length]” —Jello Biafra, frontman, Jello Biafra and the Guantanamo School of Medicine, former frontman, Dead Kennedys

“I’ve never read The Hard Times, but I will definitely check it out sometime.” —Debbie Harry, lead vocalist, Blondie