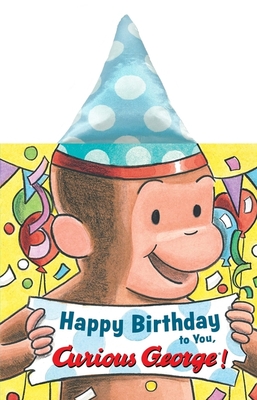 Happy Birthday to You, Curious George! (novelty crinkle board book)

Join Curious George’s birthday party in this rhyming novelty board book featuring a crinkly iridescent party hat on the top of George’s head.

George decorated with lots of balloons.
Turn on the music! Let’s hear the tunes.

Join in on the fun with Curious George as he invites readers to read along, eat their favorite fruit snacks, watch him unwrap a special surprise gift, and more on his birthday. With playful text and colorful illustrations topped by a shiny party hat, this is an interactive book for little ones who love to read and party with their favorite monkey.