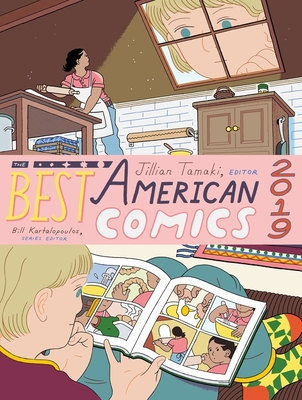 Jillian Tamaki, co-author of This One Summer, picks the best graphic pieces of the year.

“The pieces I chose were those that stuck with me, represented something important about comics in this moment, and exemplified excellence of the craft. Surveying the final collection, I’m moved by the variety of individual approaches. There are so many ways to make us care about little marks on a page.”—Jillian Tamaki, from the introduction

The Best American Comics 2019 showcases the work of established and up-and-coming artists, collecting work found in the pages of graphic novels, comic books, periodicals, zines, online, in galleries, and more, highlighting the kaleidoscopic diversity of the comics form today.

"Series editor Kartalopoulos taps Tamaki (They Say Blue, 2018, etc.) to help curate the 2019 edition of this annual collection of exceptional graphic storytelling...Eleanor Davis' incisive 'Hurt or Fuck' contemplates art and human need on an allegorical, visceral level in what could almost be a two-actor stage play. Erik Nebel's 'Why Don't We Come Together' ingeniously explores the possibilities of a rigid format—repeating but shifting shapes and colors, figures and patterns play across a set of equal-sized panels stacked into a grid, clicking through simple, whimsical stories like a filmstrip of thesis, antithesis, and synthesis...It's called 'best' for a reason."--Kirkus

JILLIAN TAMAKI is an illustrator and comics artist living in Toronto, Ontario. She is the co-creator, with her cousin Mariko Tamaki, of the YA graphic novels Skim and This One Summer, the latter of which won a Caldecott Honor in 2015. Her own books include the graphic novels SuperMutant Magic Academy and Boundless, as well a picture book for young children, They Say Blue. A professional illustrator since 2003, she has worked for publications around the world and taught at Parsons and SVA at the undergraduate and graduate level. Her second picture book, My Best Friend, written by Julie Fogliano, will be released in 2020.


BILL KARTALOPOULOS is the publisher/editor of Rebus Books and the programming coordinator for SPX: The Small Press Expo. He was a cofounder and the programming director for the Brooklyn Comics and Graphics Festival. He is a member of the Executive Committee for the International Comic Arts Forum (ICAF), a contributing editor for Print magazine, and has worked as an assistant to Art Spiegelman for several years. He lives and works in Brooklyn.
Loading...
or support indie stores by buying on