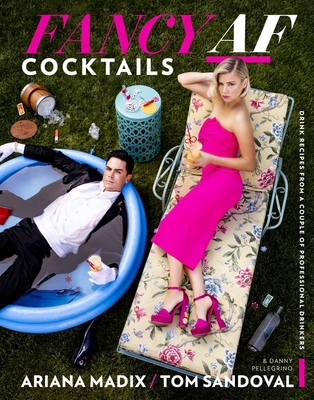 Drink Recipes from a Couple of Professional Drinkers

Bravo's hit show Vanderpump Rules, which Vogue recently called "America's perfect reality show," is a spin-off of The Real Housewives of Beverly Hills. The show is centered around the crazy, booze-fueled lives of the staff at Lisa Vanderpump's wildly popular SUR restaurant in West Hollywood. Ariana Madix and Tom Sandoval, two of the show’s stars, fell in love on the show and have stuck together through it all. They've been talking about writing a cocktail book on the show for a few seasons, and now they're finally delivering the goods with this book that has drinks for every situation. It features a mix of classy cocktails for fancy special occasions and trashier recipes for those times when you just have a few random ingredients in your kitchen and want to keep the buzz going. Shots and recovery recipes are also included, so your pregame and morning after will be covered too. Woven throughout are brand-new photos and behind-the-scenes stories crafted with the help of Bravo insider and co-author Danny Pellegrino, making this a true must-have for fans of the show.

Ariana Madix is a bi-coastally trained mixologist who has appeared on the hit Bravo show Vanderpump Rules since the second season. She’s been bartending since 2008 and trained at Butter Restaurant in NYC. She’s been at SUR in Los Angeles since 2012, but she’s also worked at CREATE, Villa Rosa, Greystone Manor, private parties, and more. She lives in Los Angeles, California.