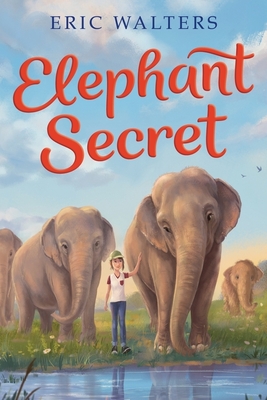 Featuring the evergreen appeal of human-animal friendships and set in an elephant sanctuary, We Bought a Zoo meets Jurassic Park in a gripping story about a thirteen-year-old girl, a cast of elephants, and a surprising new arrival—a woolly mammoth.

Sam was born and raised in an elephant sanctuary. When a beloved elephant dies giving birth, Sam develops a connection with baby Woolly—who isn’t actually an elephant but was cloned from woolly mammoth DNA. And the billionaire genius behind the cloning experiment will stop at nothing to protect his investment. Smart, determined, and loving, Sam stands up to this powerful adversary to protect the sanctuary and her herd. In the best tradition of child-animal friendship stories, Elephant Secret explores the strong and complex bond between Sam and her elephants while offering a fascinating, authentic glimpse into elephant—and human—behavior.

"Walters’ depiction of the bond that exists between Sam and her elephants is captivating. The elephants, who are presented as majestic and intelligent creatures with humanlike characteristics and rich emotional lives, will leave readers awestruck."--School Library Journal

"Walters interweaves his beautiful family story with a thorough description of elephant behavior—their intellect, compassion, and loyalty—and factual scientific possibilities of cloning an extinct species...A must-read for anyone with an interest in elephants and their welfare."--Booklist

"Walters packs in numerous details about these magnificent and highly intelligent creatures while raising complex ethical questions regarding humans’ relationship with animals."--Publishers Weekly

Eric Walters has written nearly 100 children’s books, which have been translated into 13 languages and won over 125 awards. He was named to the Order of Canada in 2014 for his contribution as an author of literature for children and young adults. Walters also runs The Creation of Hope, a charity providing care for orphans in the Mbooni District of Kenya. Visit him at www.ericwalters.net and on Twitter at @EricRWalters.
Loading...
or support indie stores by buying on
(This book is on backorder)